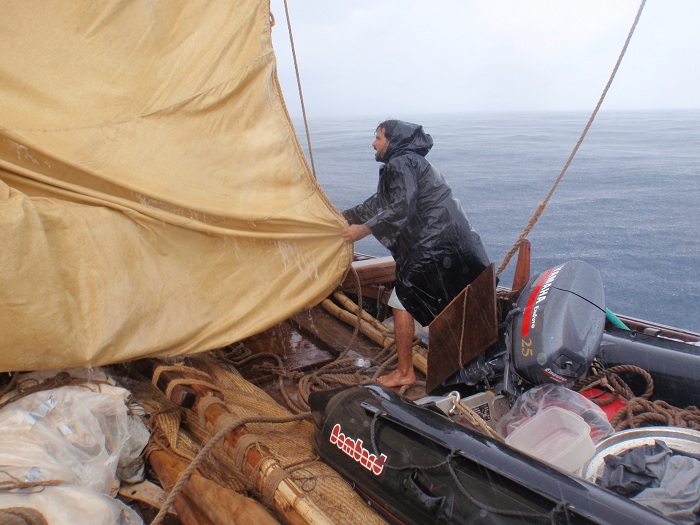 Wet and cold – but not for long!

There is no question but that the crew of the Jewel of Muscat is having to earn every mile of this passage to Malaysia. In the wake of last night’s heavy squall, we were hit by another at about 1000 this morning. Fortunately, this one didn’t contain exceptionally strong winds, but what it lacked in wind power it made up for with a prolonged deluge of rain. The combination of wind and water enabled the crew to experience an unexpected, albeit temporary, sensation–cold. Only 24 hours ago, it would have seemed ridiculous to predict that the crew would soon be huddled, shivering around steaming cups of tea, yet that was precisely the scene after the rains. The shivering didn’t last long though–dispelled as it was by a warm breakfast and the return of the tropical sun.

Liam Donohue of Vernon Connecticut asked recently if we were worried about pirates. No, we aren’t particularly concerned about this issue. But that is not to say that pirates don’t operate in the Indian Ocean. Today, acts of piracy are quite common in the western Indian Ocean, especially near Somalia.

The term “piracy” can be misleading, and some groups who are referred to as “pirates” are more correctly labeled “corsairs.” The main difference is that pirates operate autonomously, while corsairs are, in some way, supported or endorsed by a political leader or state. Even this distinction, however, is not always clear.

What is clear is that sea-borne raiding has been a part of maritime life for as long as merchant ships have plied the broad waters of the Indian Ocean. A 1st century CE inscription from the ancient Egyptian port of Berenike, for example, describes how the Romans used archers from Palmyra (Syria) to defend their ships from pirate attacks. The Roman ships were engaged in the lucrative trade in pepper and aromatics and could ill-afford to lose a ship full of such precious cargo to pirates.

In the 14th century, Marco Polo described how corsair ships formed cordons of 20-30 vessels which lay in wait for passing merchant ships off the west coast of India. Once sighted, all the corsairs attacked and plundered the ships. Only a few years after Marco Polo, a ship carrying the great Arab explorer, Ibn Battuta was attacked in the same west-Indian waters by twelve raiding ships. Once aboard, the corsairs stole everything but his trousers, including “the pearls and rubies that the king of Ceylon had given me.”

For centuries–and up until quite recent decades–the Straits of Malacca, which the Jewel of Muscat is now approaching, were a haven for corsairs and pirates. An early 15th century Chinese mariner warned that many of the coastal inhabitants of the straits were pirates, and described how they used one hundred small boats to stalk their prey for days before choosing the right moment to attack.

But despite its colourful history with regard to pirates and corsairs, the region of the Indian Ocean through which the Jewel of Muscat is sailing is remarkably safe. Thankfully, this means we can concern ourselves with more pressing issues such as navigation, ship maintenance, and the weather.