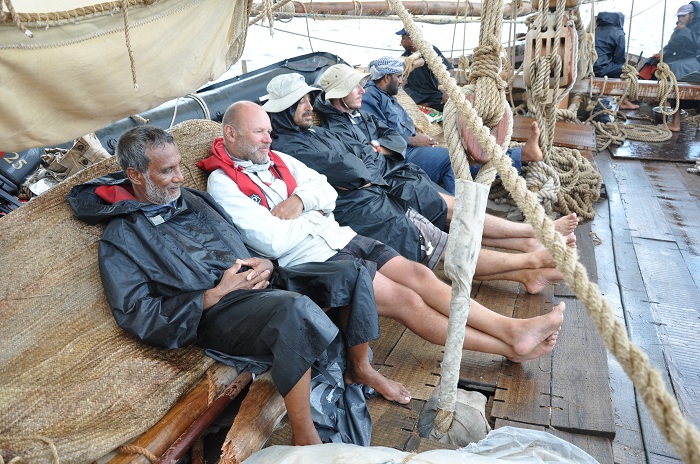 Waiting for the rain to end

So near yet so far!

Another long day of extremely light, changeable winds. The morning began with nary a hint of breeze and with the sails hanging limp upon their yards. By 1000, however, a large weather front developed ahead of us and the crew prepared the ship for a squall. In the end, the heart of the storm slid past us to the north and we were left with only a long, gentle rain–which was fine with the crew. The afternoon was sultry and still, and a contrary current periodically forced the ship to move backwards for an hour or more at a time. Consequently, we covered a mere 14 miles in 28 hours–the worst mileage since we left Muscat.

Despite the lack of wind and our admittedly frustrating progress, there are always moments to savour aboard the Jewel of Muscat, and today was no exception. In the late afternoon a pod of dolphins entertained the crew with spectacular leaps and flips through the air. And towards evening, we were treated to one of the most magnificent sunsets we’ve seen thus far on the voyage.

We are now within 50 miles of Penang. We can see the lights of dozens of small fishing boats doting the horizon. If the wind manages to strengthen even modestly we could get within sight of Penang by tomorrow evening. It would be a welcome sight indeed.