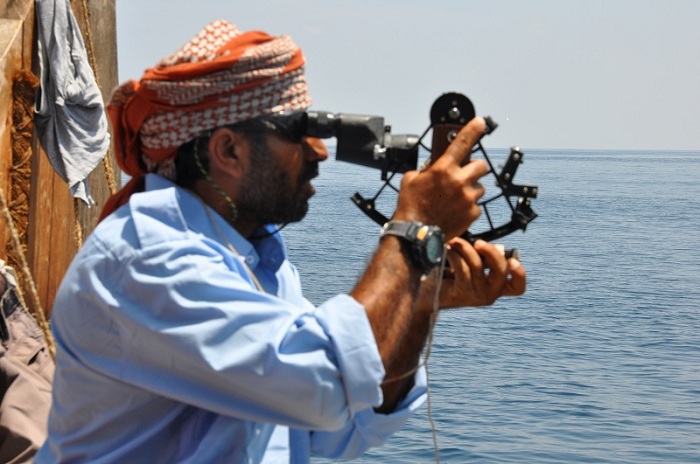 Our fourth day of searing heat and little wind began quite like the previous three. After a breakfast of dhal, the crew undertook routine chores then sought whatever shelter they could find from the relentless sun. The limp sails, however, afforded little shade. By late afternoon, it began to look as if the weather predictions might have been correct–clouds built up in the west and the breeze freshened slightly. Our speed increased by a knot or two. By early evening the clouds had become a tropical squall, but it was still some distance away and we were uncertain whether it would pass by without engulfing us. Just after dinner, it became clear that the squall would indeed hit, so the crew donned their harnesses and rain gear. It was also clear that the day, which had begun so much like other recent days, would end in its own dramatic fashion.

After an hour of steadily increasing wind, the squall hit in earnest at about 1945. The wind hummed in the rigging, and when it exceeded 30 knots, the order was given to lower the mizzen sail. Only moments later, however–and before any effort could be applied to the mizzen–a loud crack reverberated from the bow area and we saw that the lower yard of the main sail had snapped in two. Without hesitation, the crew focused on securing the wayward yard and hauling in the main sail. It was a difficult task in the torrential rain, rolling deck, and darkness, but the crew managed to get everything under control in a relatively short time. They then focussed on lowering and securing the mizzen sail until the squall had passed.

Once the winds and rain had abated, the crew put the spare yard on the main sail and, after some repairs to the mizzen, raised both sails. It is now almost midnight and we are on course again under a moonlit sky. Unfortunately, the squall did not bring a change in the overall wind situation, and we are once again nearly becalmed. What little forward speed we can manage, is counteracted by a head-on current. But the crew remains in good spirits. We have weathered yet another squall, the ship and crew are safe, and as mariners have done for millennia, we’ll hang our wet clothes out to dry and hope for fairer winds tomorrow.