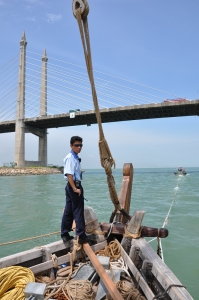 After spending two weeks in Penang, the Jewel of Muscat set sail today on the penultimate leg of its five-month voyage to Singapore. The crew spent the early morning hours loading provisions and making final preparations for sailing. At 0900, they enjoyed a breakfast reception during which several speakers, including Mr. Ali Ahmed, Oman’s Deputy Ambassador to Malaysia, offered their best wishes to Captain Saleh Al Jabri and the crew for a safe onward journey. The departure commenced at 1000, but due to strong currents and confined space, it took an hour and a half for the ship to exit the marina and enter the channel. Fortunately the skillful work of our Penang harbour pilot, Syabail Akmar Said, helped ensure that the Jewel of Muscat made it safely into open water.

Since leaving Penang, the winds have been light and variable, but we have managed to cover approximately 45 miles since noon–leaving 120 more until Port Kalang. As we expected, the lights of numerous ships dot our night-time horizon so we are proceeding southward through the Straits of Malacca with extra vigilance and caution.

One of the more enjoyable aspects of our stays in port is the opportunity to talk with the many people who come to visit the Jewel of Muscat. We take special delight in visits from school children because they are often bursting with enthusiasm and ask all sorts of questions about the ship, sailing, and life on board. We also enjoy receiving letters and postcards from those who have seen the ship in previous ports or on the website. During our recent time ashore, for example, we received a letter from Rhea Singh, a 9th grade student at The American International School of Muscat. Ms. Singh visited the Jewel of Muscat with her classmates when the ship was under construction in Qantab, Oman. Her letter is so thoughtful and inspiring that we thought we should share some excerpts of it with all of you.

“There are some things in your life you never forget. They leave a mark on your heart. For me, one of them is the Jewel of Muscat.

“The Jewel is not just a ship sailing to Singapore, it is a symbol of peace and friendship between countries. It is worth our applause when one country reconstructs the oldest shipwreck in the Indian Ocean, then sails it across great bodies of water just to give it to another nation.

“And what’s more, today, while many nations are involved in wars, two countries took an initiative for peace. An event like this becomes something one cherishes forever. The daring crew is doing something that no one has dared to do in recent history, sailing a replica of a 9th century ship from Oman all the way to Singapore, for friendship.

“The reconstruction of the ship influenced me because it showed will-power. It portrays the determination of the crew to build and sail a ship that many people thought couldn’t be built. Even more striking is that it was built for friendship and not for prominence. I consider Oman my home and the fact that it is doing so much for friendship and harmony truly makes me proud.

“Seeing the ship hasn’t inspired me to do something along the same lines, but it has definitely taught me much about fortitude. I have learned that nothing is impossible. If they can build such a breath-taking ship without nails or screws, why can’t I get an ‘A’ in a difficult class or stop arguing with my brother? We humans often get so caught up in ourselves that we fail to notice and appreciate the things around us. However, after seeing the Jewel of Muscat, I definitely realize the importance of doing so.

“Jimi Hendrix, the guitar legend, wrote, “When the power of love overcomes the love of power, the world will know peace.” In life we are so one-tracked about ourselves that we rarely stop to think about the people around us and our relationships with them. Looking at the Jewel of Muscat brings a flutter to my heart. If I could contemplate it in silence, I would probably cry at its divinity. Overcoming so much to strengthen international bonds of friendship really is achieving peace in the world.”

Thank you Rhea for your kindness and encouragement. Those of us aboard the Jewel of Muscat do indeed see this voyage as a mission of peace, and we are honoured to be a part of that mission.