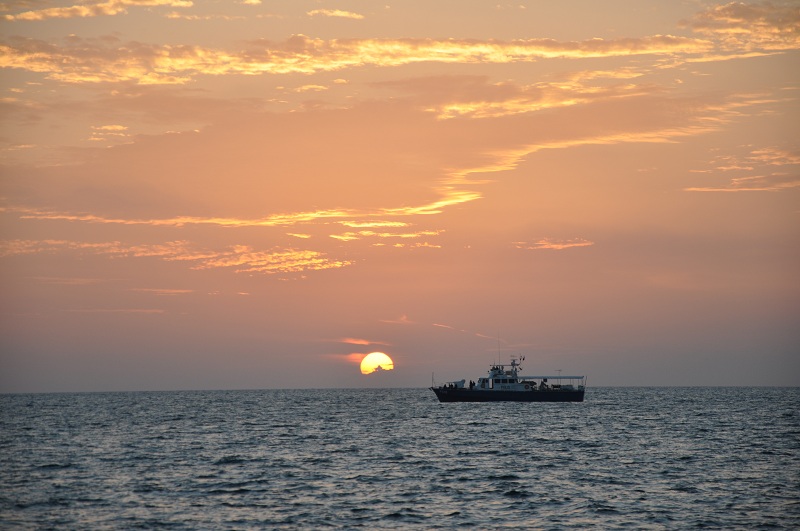 We enjoyed a beautiful day of sailing today. Although the winds are generally light, they have been steady–enabling us to make reasonable progress toward Port Klang. For the crew, it was a relatively quiet day with work limited to the usual cleaning and maintenance tasks. Given how many large ships and fishing boats ply the waters of the Straits of Malacca, the Malaysian government generously assigned a series of their Coast Guard vessels to escort us through the straits. Our current escort, PX-10, patrols the waters around us day and night–adding a welcome degree of security in this crowded waterway.
In the late afternoon, a colorful sea-snake swam alongside the ship–but too briefly to be photographed. This was the first sea-snake we have seen on the voyage and, in the tradition of Coleridge, we took it as a good omen and recalled the wonderful stanzas from his The Rime of the Ancient Mariner in which the mariner acknowledges the serpents’ beauty:

The snake was not the only special gift of nature we enjoyed today. After the half-moon set tonight, we were treated to a magnificent display of stars–and many shooting stars–the likes of which we have not seen since the first leg of the voyage.

We have a new crew member aboard for this leg. Mr. Vincent Wee was born and raised in Singapore. His father introduced him to boating when he was young and he began sailing small Optimists at age nine. Over the years, he tried other sports including windsurfing, but returned to sailing in earnest after completing university.

Mr. Wee’s university degree was in mass communications, which led him to choose a career in journalism. For the past ten years he has managed to combine his passion for all things nautical with his career by covering shipping-related news for the Business Times of Singapore.

In 2004-2005, however, Mr. Wee took time off to join the first Singaporean entry in the Clipper Round-the -World sailing race for single-class, 68-foot yachts. The ten-month race began in Liverpool and included calls in Portugal, Brazil, South Africa, Australia, China, Canada, Panama, and the United States before ending back in Liverpool. It was during this epic voyage–especially during the ferocious weather of the Pacific leg–that Mr. Wee realized how much he enjoyed life on the open ocean. He also developed a much greater respect for the mariners of old, and a deeper appreciation of the trials and efforts they endured to expand commerce, enrich cultures, and help shape world history.

Mr. Wee was introduced to the Jewel of Muscat project by a friend in Singapore’s Ministry of Foreign Affairs. He is thrilled at having been invited to join the crew for the ship’s final two legs. His knowledge of sailing conditions in this region, and his navigational expertise are invaluable assets to the Jewel of Muscat as she makes her way through the Straits of Malacca. We are all delighted to have Mr. Wee aboard.