Georgetown in the morning! 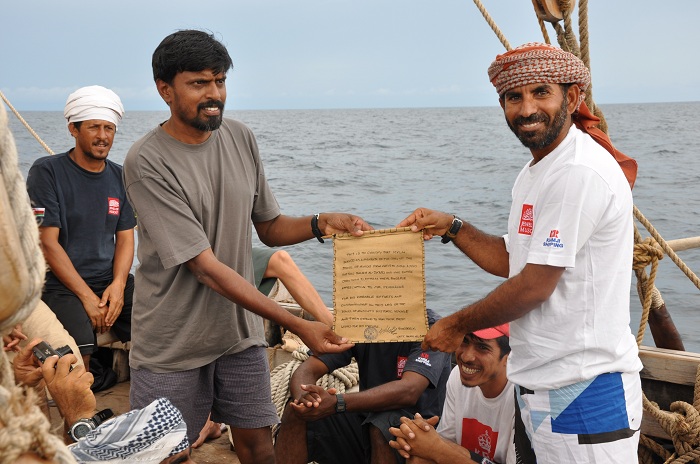 At long last the spell of doldrums was broken today. At about 0800 a heavy front approached from the west. With mizzen down and main sail squared we rode before the wind and driving rain, reaching a top speed of 6.5 knots and covering nearly ten miles in two hours. When the front passed, the wind diminished somewhat but continued to propel us along at a respectable three to four knots.

Before dinner, Captain Saleh called a meeting at which he announced that the welcoming reception in Penang was scheduled for 1000 tomorrow, and that we should arrive near the entrance of the harbour at about dawn. This news elicited a hearty cheer from the weary crew. Captain Saleh also thanked Mylai Prabhakar for his outstanding work as crew member and electronics specialist during this passage from Galle. Mylai’s efforts–under extremely difficult conditions–made an invaluable contribution to the success of this voyage. He will be leaving the Jewel of Muscat in Penang to return to his job as electronics engineer aboard an oilfield service ship in the Gulf. We shall all be sad to see him go, but we are deeply grateful that he was able to join our crew for this eventful leg. We wish him the very best in his future endeavors.

It is now 2200 and the glow from the lights of Penang is lighting up the sky ahead of us. The wind is light, but we are making progress and are on schedule to arrive at the harbour entrance in the early morning. The crew is in high spirits and, as tired as they are, even some of those who are off watch are too excited about our impending arrival to sleep. The stars are out, the stow-away cricket is chirping happily from somewhere behind the helmsman, and, God willing, the rising sun will see us in Penang in the morning. It has been a good day.