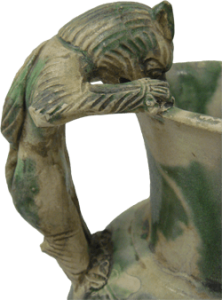 In 1998, a German company was given permission by the Indonesian government to excavate the wreck of a 9th century Arabian ship that had been discovered by a local fisherman off the island of Belitung. With the wreck of the sunken vessel were found 60,000 pieces of rare Chinese porcelain. The collection became known as the Tang Treasure.

The Tang Treasure was identified as having been produced in kilns in what is now the Chinese province of Hunan. It was probably intended for export to Malaysia, India and Arabia.

The Tang Treasure includes blue and white porcelain, tricolored glazed pottery from the Tang dynasty, and three early Qinghua plates, the best preserved of their kind ever found. Inscriptions found on some of the pieces suggest that the pottery was produced and transported in the early 9th century, and carbon dating has confirmed this. Islamic inscriptions, written in Arabic calligraphy, also reflects trading relations between China and the nations of the Arab world. 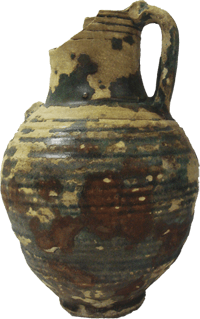 The discovery of the shipwreck and its cargo is significant, therefore, as it indicates that a maritime trade route existed between Arabia and the Far East as early as the 9th century.

The shipwreck itself also revealed much about Arab shipbuilding and navigation from the period. Well-preserved fragments of the ship showed that stitching was used by Arab craftsmen to bind the timber of the hull, while tests on the ship’s wood revealed its origin. The location of the wreck, furthermore, offers insight into the nature of routes taken by 9th century navigators to and from China.