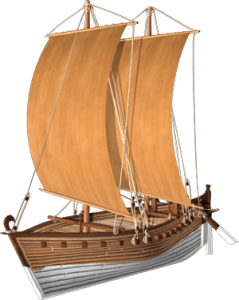 The Jewel of Muscat project was an historical and cultural initiative launched by the governments of Oman and Singapore that involved the reconstruction of a 9th-century ship and sailing it from Oman to Singapore.

The ship’s design was based on the archaeological findings of the Belitung Wreck, which was discovered in 1998 in Indonesia.

The ship represents a major feat of maritime engineering. The hull was sewn together with coconut fibre. Built without nails to fix the hull planks, each timber had to fit perfectly. The wood was protected by a layer of goat fat mixed with lime, and the sails were square and made from palm leaves.

The ship set sail from Oman to Singapore, which is presumed to have been a key stopping point of the Belitung ship, in its journey westwards, before it was wrecked. It travelled along the same route as those described by Arab geographers, using the same knowledge as Arab seamen.

The team on the ship used 9th-century navigation techniques, plotting the course for the 18-metre ship with a “kamal” (a small block of wood connected to a piece of string that can calculate latitude), and the stars and the sun. Observation of the sky and sea colour, marine and bird life, and wind direction were also used as aids to navigation. Modern instruments were used to check the navigation techniques.

The journey began in February 2010, and the ship reached Singapore in July 2010.