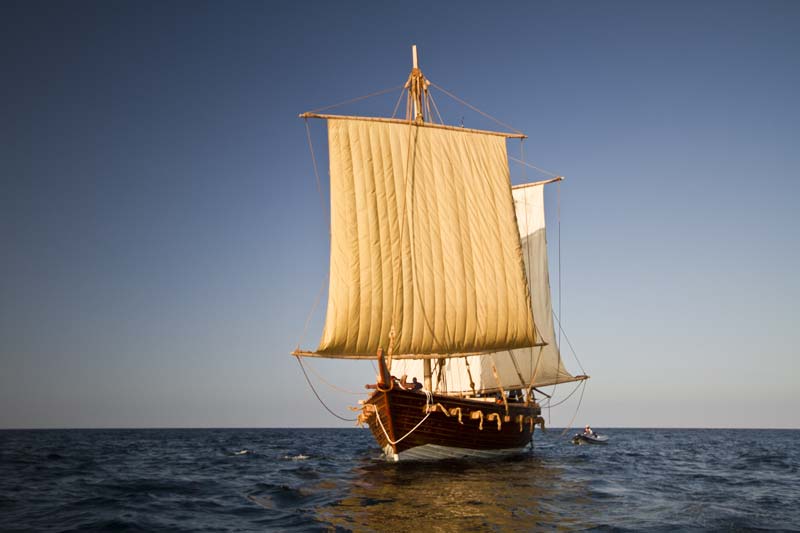 The next major milestone for Jewel was passed in January when she completed her first sea trial off the coast of Oman near Muscat. In the following weeks, Captain Saleh and his crew faced up to the challenge of learning how to sail a 1,000-year-old ship with traditional rigging and heavy canvas sails. Jewel performed beautifully as the crew got used to the heavy work of hauling on her ropes.

In his speech to a gala dinner that evening, H.E Sayyid Badr bin Hamad Al Busaidi, Secretary General of the Oman Ministry of Foreign Affairs, talked about how Jewel of Muscat was proving an inspiration to Omanis:

“When her mast was fitted, the Jewel was docked near one of the most modern, state-of-the-art yachts. The contrast between the two was remarkable. Twelve hundred years of Omani maritime heritage were captured in that single image; two eras, centuries apart, united by the continuity of the sea. But in my ‘unbiased’ opinion, the Jewel stole the show.

She has already helped to revive successfully an important aspect of Omani heritage. The project’s engagement with schools and youth is perhaps one of its greatest contributions, linking young people with their national history whilst also offering them knowledge, practical skills, and a new range of possibilities for their own futures.”