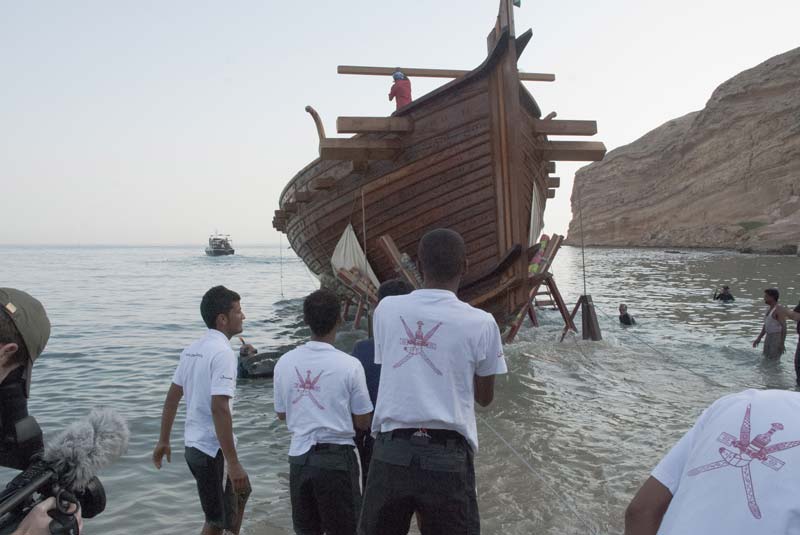 As the construction team worked on the decking, engineers were called in to prepare for the launch of Jewel. A track was laid down to carry the 23-tonne ship 100 metres down the beach into the sea. Then a huge cradle had to be built to support the ship. The process of launching Jewel became a desperate race against time to have everything ready for the high tides needed to float her into the sea safely.

As launch day approached, the construction team worked round the clock, laying the very last sections of track late at night with the tide rising around them.

Finally on October 18th, with the help of scores of volunteers heaving and pushing, Jewel slipped into the Oman Sea. Under the command of her newly appointed captain Saleh Al Jabri, the ship sits perfectly in the water and the construction team erupt in joyous celebrations as 12 months of hard work come to triumphant fruition.

Jewel was then towed on her first short voyage to a nearby marina, so that the process of fitting her out for sea could begin. Throughout November work continued on Jewel’s sails and rigging and then in December the ship’s masts were lowered into the hull.

At the same time, planning for Jewel’s voyage moved into top gear with a meeting of representatives of the countries that Jewel would visit on her long voyage to Singapore – India, Sri Lanka and Malaysia.