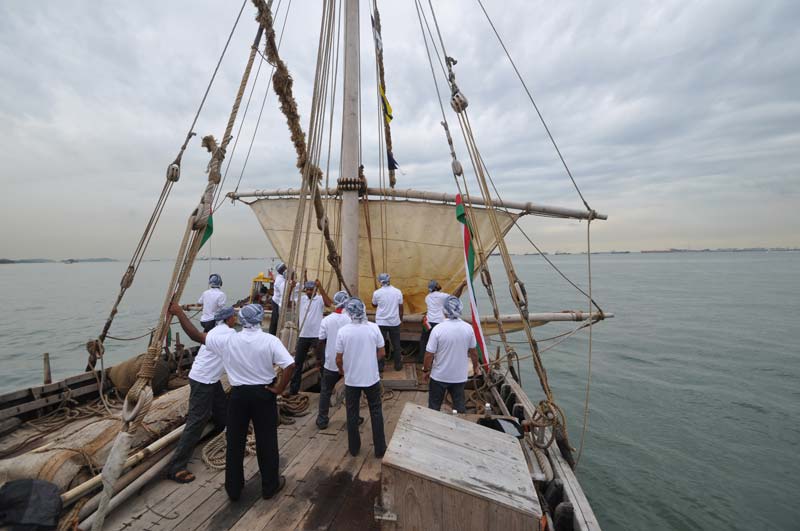 The arrival in Georgetown, Malaysia on June 2nd 2010 was a huge relief for the crew and marked a new phase in the voyage. Once again Jewel was welcomed with friendship and generous hospitality before she set sail on the last two short legs of her voyage.

Following the coast of Malaysia, Jewel now entered the Strait of Malacca, one of the busiest shipping lanes in the world. Here she faced a new danger. With no engine and only her sails to guide her, the tiny wooden ship had to take great care not to be run over by the huge container ships ploughing up and down the strait. at night this became a real challenge with the crew constantly scanning the darkness for warning lights and taking evasive action when necessary.

But this time nature was kind to Jewel – spectacular electric storms would periodically light up the night sky allowing the crew to see all around them – if only briefly!

After a brief stop in Port Klang in southern Malaysia, Jewel then began the final leg of her historic voyage. On July 3rd Jewel made a spectacular entrance into Singapore. Saluted by fireboats and with a huge crowd cheering her on, Jewel edged into Keppel Bay Marina at 5pm to a spectacular welcoming ceremony.

The crew received a warm official and public reception from His Excellency the President of Singapore S.R. Nathan, and His Highness Sayyid Harib bin Thuwaini Al-Said, Envoy and Representative of His Majesty Sultan Qaboos bin Said. Also present were His Excellency Sayyid Badr bin Hamad Al Busaidi, Secretary General of the Ministry of Foreign Affairs, George Yeo, Foreign Minister of Singapore and other distinguished diplomats, dignitaries and business leaders.

In a symbolic ceremony, the Jewel of Muscat was formally handed over as a Royal gift from Oman to the people of Singapore. After 67 days at sea and more than 6,500 kms of sailing, Jewel of Muscat had completed her mission with all her crew safe and well.

The following days saw great celebrations and, on July 10th, Jewel’s crew flew home to Oman to a heroes’ welcome. There were scenes of joy and jubilation as the crew members were reunited with their families.

In tribute to his bold and wise work as Captain of Jewel, His Majesty Sultan Qaboos bin Said awarded Saleh Al Jabri a Medal of Honour.