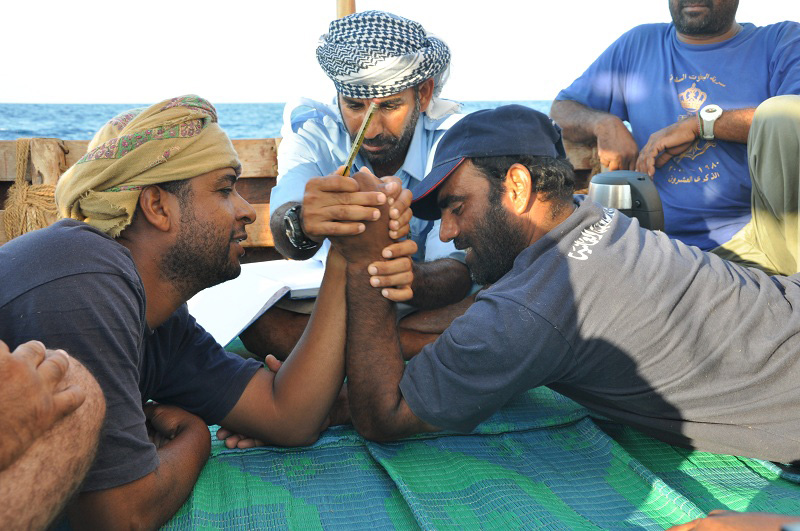 Arm wrestling between Yahya and Ahmed

Whale-watching and other sports

Today began at early dawn with the sighting of a large whale off the starboard side. The morning light was too dim for a photograph, but the great size of the whale and its relatively small dorsal fin, set well back towards the tail, suggest that it might have been a blue whale.

If so, then the crew of the Jewel of Muscat was treated to a very special event. The blue whale is the largest animal on earth, indeed it is the largest animal that has ever lived. The largest members of the species can grow to a length of 30 meters and weigh approximately 200 tons, but in the Indian Ocean they tend to be a bit smaller.

In the early 1960s, whaling ships entered the Arabian Sea for the first time. In just 3 years, using powerful explosive harpoons and a well-coordinated system of hunting ships and factory ships, the fleet managed to kill more than 3,300 whales of various types. Fortunately the global community declared the blue whale a protected species in 1966, and a complete world-wide ban on whale hunting was enacted in 1986. (Note: If you are interested in learning more about whales in this region, please see Robert Baldwin’s Whales and Dolphins of Arabia, 2003)

After the excitement of our visitor, we settled in for a day of good sailing with a fair wind. Because of the increasing heat, we rigged a series of canvas sheets over the three open hatches to direct air into the hold–a form of 9th century air conditioning. The system worked well so we’ll continue to use it as much as possible for the remainder of the voyage.

In the afternoon, the crew enjoyed a series of contests between the watches. The competitions included arm wrestling, charades, egg racing, and general questions on any topic. Although it was all done in the spirit of fun and friendship, the games were fiercely contested by both sides. In the end, the Port Watch was victorious and there is little doubt but that their celebration songs were heard as far away as Cochin!