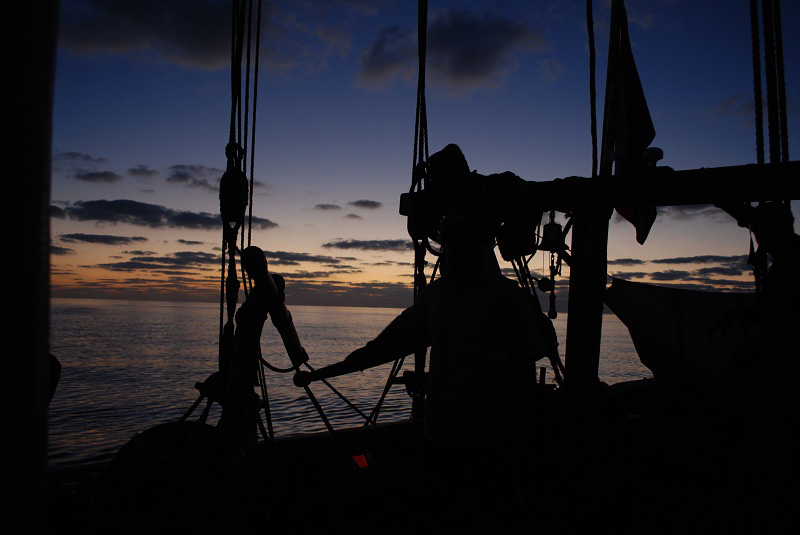 Evening at the helm

Humbled by the heavens

We have been observing the stars carefully every night, for navigational purposes and to learn the various constellations and planets

An uneventful day, and a very light breeze until evening when the winds picked up to between 9 & 11 knots. Eric took advantage of the calm sea to ascend the mizzen mast and clean the lens of the mast camera. Getting to the top of the mast is always risky, but one is rewarded with a unique view of the ship below and the broad sea beyond.

The current wind speed makes for delightful sailing as we glide along beneath the stars. It is exhilarating to be at the helm at such times: chewing on a piece of dried shark, the sails full, the water hissing along the hull, and the magnificent heavens above.

As we have moved into ever lower latitudes, the heat and humidity have increased. Below decks it is quite uncomfortable so, space permitting, a number of the crew have opted to sleep on deck.

We have been observing the stars carefully every night, both for navigational purposes and simply to learn the various constellations and planets. Here in the middle of the ocean, where there is no ambient light from cities, the night sky is incredibly clear. One notices characteristics of the stars such as brightness (magnitude) and colour that can be missed on land. Vega for example is remarkably blue, Arcturus is orange, and Capella is distinctly yellow. We are also far enough south to see the Southern Cross, which can’t be seen in northern latitudes. Its longer segment points directly to the south pole.

When looking at the heavens one is humbled to realize that many ancient people recognized far more stars and constellations than the average person of the 21st century. Certainly that would be true of a 9th century Arab mariner.

Of course, although we might not recognize the stars by name or know what phase the moon might be in on a given night, we moderns do know far more about the nature of the stars. We understand, for example, that stars are suns like our own, and that they vary in size from subdwarfs (about the size of the earth) to supergiants (with a diameter nearly 3,000 times that of our sun).

But one aspect of the night sky that is most awe-inspiring is the almost incomprehensible distances bewteen the stars. This distance is measured in light-years–the distance light travels in a year. As we remember from our high school physics class, light travels at 186,000 miles (300,000 km) per second. That works out to an astonishing 6 trillion miles (10 trillion km) per year. At this rate, it takes about 8 1/2 minutes for light from our sun to reach the earth. Yet the light from the next closest star to us, Alpha Centauri, takes 4 1/2 years. Many stars are hundreds or thousands of light years away.

Thus it is literally true that when we gaze up into the night sky, we are looking far back in time to light that was first emitted many ages ago and is only now arriving at the earth. This means that if we could instantly travel 1,180 light years away from the earth, and we used an ultra-powerful telescope to look back towards our planet, we might be able to see a 16 meter sewn Arab ship leaving southern China with a cargo of 60,000 pieces of Chinese ceramics.