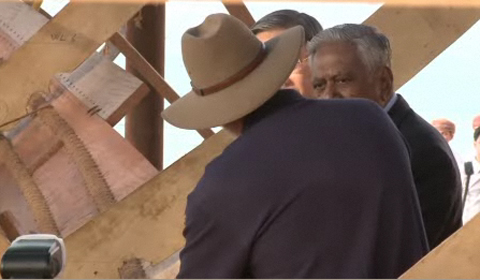 As it was a state visit, there had been a week of preparation, some of it aimed at security but also to smarten up Qantab. The village had been transformed by an army of contractors: the shabby boat in the roundabout painted, houses painted, new lines painted on the roads, the curbs and guardrails painted, scrubbed gravel trucked in to beautify the verges along the roads. The village had been scheduled for a facelift by the government anyway, but the timing advanced. A wide walkway with red carpet was installed in the building site, and a gallery with chairs for dignitaries and guests erected. For three days before the visit all the village goats were locked up. Inevitably, all this activity had an impact on the progress on the ship itself, but was well worth it.

His Excellency President Nathan arrived and was formally greeted by all of us. Upon returning to my designated seat, I discovered someone had made off with the project publicity folder that just happened to have my speech inside. Time to panic. I sat down, mentally trying to recapture the essential points outlined in the speech. A minute before I was due to embarrass myself, Eric shoved an older copy of the speech into my hand. I don’t know where it came from, but shall be eternally grateful.

After the short welcoming speeches by His Excellency Sayyid Badr, me, and Lamya Al-Kharousi, the president launched the website. Following the launch, part of the well-rehearsed program was for me to show the ship to President Nathan and Sayyid Badr, for which some stairs and a small viewing stand had been erected alongside. As we approached the ship the president gestured to the temporary wooden forms that we are using to guide the construction and remarked “Oh, those are the lofted moulds!”

“Ah, Mr President,” I said, “you know something about boat-building.”

“Yes, I used to be president of a shipbuilding yard,” he declared. Instantly, the spiel I’d concocted to explain the boat to a layman was discarded. We carried on a most enjoyable and spirited discussion of the details and unique features of the ship. The President was then shown the model of the ship, so he could see how the finished vessel would look, then signed our guest book, and was presented with gifts.

We were delighted with the President’s visit, and the boost it bestowed on the project, and how it served to further cement the bi-lateral relations between Oman and Singapore.