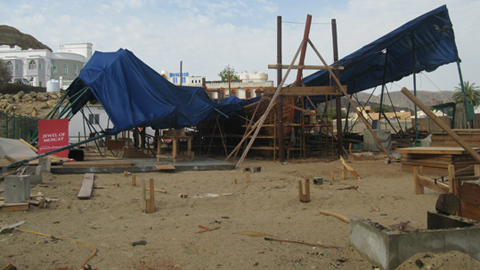 Dark clouds loomed over the mountains, lightning flickering, an ominous rumbling of thunder

The storm swept in quickly, the rumbling quickly building to crashing thunder, wind driving buckets of rain and cherry-sized hail nearly horizontally. We had finished work for the day about 45 minutes before, and were just speculating that it might be interesting to sit on the verandah and watch Nature’s show, when it became apparent that stopping the rain pouring through the windows of our house was perhaps more important.

After several frantic minutes of stuffing towels around the casements, moving electrical equipment and books out of harm’s way, I returned to the verandah. By this time it was dark, but the lightning revealed a horrific sight on the beach below. The entire shelter over our boat lay in a tangled heap – right on the boat. The wind had skewed the entire structure to the left, the welds had broken, the roof had crashed down.

I rushed down to the site, at the same time calling the other staff on my mobile to mobilize our workforce and get everyone back to the site. The rain had been so intense that the wadi bisecting the village was full, effectively isolating some parts. Eric and Alessandro abandoned their 4WD and forged the wadi on foot. At the site here seemed to be wiring hanging loose from broken and twisted steel beams, so as a precaution we shut down the electrical supply to the site.

Under gas lanterns and flashlights we worked until 2200 that night, securing the wreckage, propping up steel beams that lay on the boat and steel pillars that had once been vertical but now leaned in confused angles.

The morning light revealed that the boat was fine – no significant damage at all. Ninth-century technology had survived the failure of twenty first-century technology. Alessandro summed up the situation, “The boat is not even finished yet and has already weathered her first storm!”