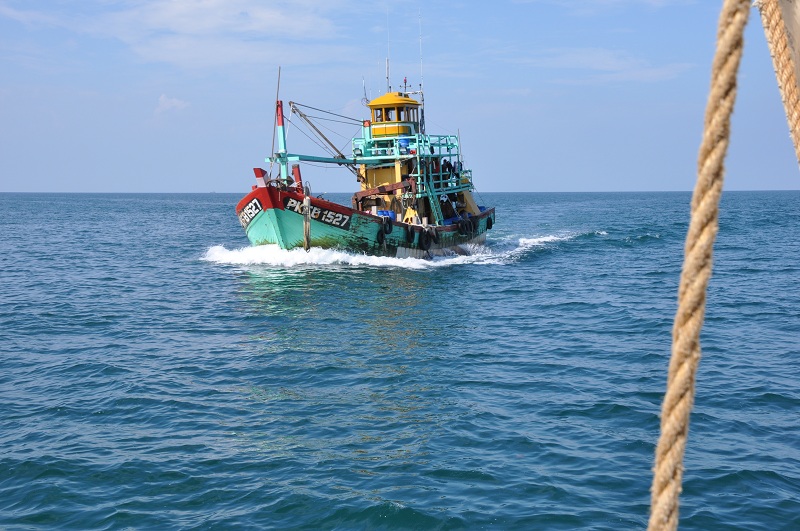 A local fishing boat making a rather close pass

Another day of light but steady winds. The heat and humidity were oppressive, but the modest work schedule enabled the crew endure the high temperatures without too much discomfort.

After a man-overboard drill, Captain Saleh took the opportunity to use our inflatable boat to visit the Malaysian escort boat, the PX-10. Their crew received him warmly and gave him a quick tour of their vessel. Some of the more radical football fans aboard the Jewel of Muscat were hoping that the captain of PX-10 would invite them over to watch tonight’s match between Italy and New Zealand. To their disappointment, however, the PX-10 did not carry a television so no such invitation was possible. Their captain did give us a small bag of fresh fish – no great consolation for the football fans– but given that we have still not caught any fish on our own, it was a welcome gift nevertheless.

The winds picked up slightly during the night and although we could see heavy lightning to the east and north, the weather in our vicinity remained clear. The eastern sky is brightening now and we are only ten nautical miles from the entrance to the main channel leading into the port of Klang. We anticipate arriving at the marina in the early afternoon. After the great distances and challenges of our previous legs, it seems odd to be calling at another port after only three days at sea, but we are happy to have completed another leg safely. After a few days in Klang we’ll cast off again and set our sails for Singapore.