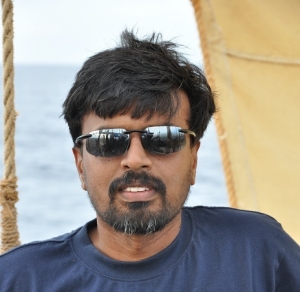 Living by the wind

After growing up in Chennai, India, I decided I wanted a career that would permit me to see the world. Because of this, and the fact that I had always enjoyed sailing and being by the ocean, I decided to study at the Maritime College in Chennai. Since then I have spent my entire career at sea–first as radio operator, then as navigator, and currently as electronics and navigation engineer. I have served aboard twenty ships of different sizes over the years and have travelled all over the world. I am presently on a six week leave from a dive-support ship operating in the oil fields of the Arab/Persian Gulf. I enjoy my job enormously and have many happy memories of the exotic places I have visited. There have been unpleasant experiences too, such as storms in the North Atlantic and a frightening attack by pirates off Somalia in 2000, but overall it has been a great career for me.

My involvement with the Jewel of Muscat began when I responded to a notice issued by the Indian Sailing Federation and the Indian Yachting Association asking for volunteers to serve aboard the Jewel of Muscat. As a professional mariner, I had always wanted to experience life aboard a real sailing ship, and I was especially interested in learning more about traditional methods of navigation. I applied for a position as crew member and, to my delight, I was accepted. I would have preferred to be on board for the entire voyage from Muscat to Singapore, but my work commitments only permitted me sufficient time to serve on the passage from Galle to Penang.

It has been a remarkable voyage. We’ve encountered every form of weather condition from doldrums to raging storms, and we’ve sailed at speeds ranging from 1.5 knots to an astonishing 11 knots. As someone used to the amenities of a large, motorized ship, I have learned much from experiencing the vulnerability of being in the middle of the ocean on a small wooden vessel, and of having our movement entirely dependent upon the whim of the winds. As a result, my admiration for ancient Arab and Indian mariners has certainly increased.

I regret that I shall be leaving the Jewel of Muscat in Penang, but I will be forever grateful for having had the opportunity to sail aboard such a unique and historically important ship. I applaud the government of Oman for supporting this fascinating project, and I would like to extend my deepest appreciation to Oman’s Ministry of Foreign Affairs, Dr. Tom Vosmer and other project officials, the Indian Yachting Association, and the Tamil Nadu Sailing Association for giving me this once-in-a-lifetime opportunity.