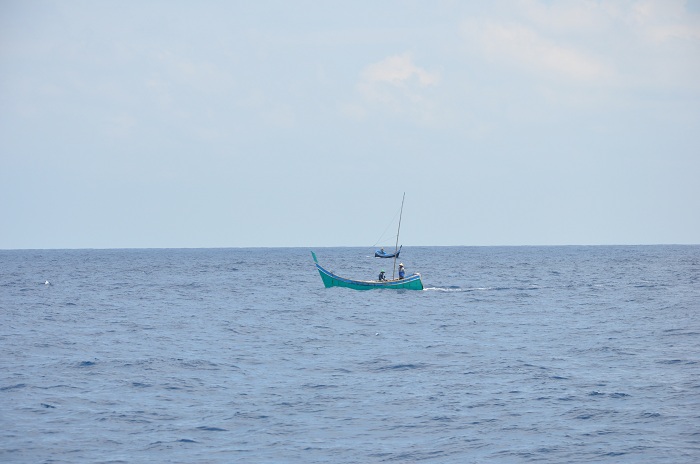 A calm day with little wind is a good time to reflect on the lessons of the voyage
The poet C. Robert Hilton wrote, “Sea life is just life, with its doldrums and gales, its reefs and hospitable shores.” Since we’ve had our share of gales aboard the Jewel of Muscat this leg, it is only fair to expect some doldrums–which is exactly what we experienced today. Clear skies, hot temperatures, calm seas, and barely a breath of wind. The crew used the calm seas to change the main sail from canvas to mat, and to begin tidying up the ship in anticipation of our eventual (rather than imminent) arrival in Penang.

In the afternoon a group of three fishing boats from Sumatra came into sight, but although we hailed them in several languages, they would not approach us. Perhaps they thought we were pirates. In any case, their colorful boats were small, and they were a long way from shore. One wonders if they have always had to venture so far to secure their daily catch.
For our part, the crew of the Jewel of Muscat has had no luck at all catching fish. Indeed the only fish we’ve “caught” were two flying fish that landed accidentally on deck during a storm. On one level, perhaps our lack of success could be attributed to our deficiencies as fishermen. On another level, however, our inability to catch fish might have a deeper and far more disturbing cause–there simply aren’t many fish to catch. This might sound like the excuse of a frustrated fisherman, but it might also be an inconvenient truth we would prefer to ignore. As evidence, we should consider the fact that since the advent of industrialized fishing in the 1950s, global stocks of fish such as bluefin tuna, grouper, and cod have been reduced by 90%, and the populations of many other “food” species have declined by between 60% to 80%. When the Sohar sailed from Sri Lanka to Malaysia in 1980, the crew caught fish every day. We are sailing along the same route and have caught nothing.

This downward spiral in marine population numbers also applies to whales. They are enormous and mysterious creatures and they live in a world largely alien to ours, but nothing in their 65 million years of evolution prepared them to survive the consequences of human negligence and predation–the destruction of their food sources, chemical pollution, sonic pollution caused by mechanized shipping, and of course large-scale industrialized hunting. In Moby Dick (1851), Herman Melville wrote:

“Owing to the almost omniscient look-outs at their mast-heads of the whaling ships, now penetrating even through the Bering Straits, and into the remotest secret drawers and lockers of the world: and the thousand harpoons and lances darted along all continental coasts; the moot point is, whether Leviathan can long endure so wide a chase, and so remorseless a havoc; or whether he must not at last be exterminated from the waters.”

What Melville predicted 160 years ago very nearly came to pass–global whale populations fell by an average of 65%, with some species such as the blue whale suffering reductions of 90%, until the 1979 international ban on commercial whaling. Despite the ban, whale populations today–and fish populations as well–are, in the words of marine biologist Sylvia Earle, a “fragment of a fragment” of their pre-industrial levels. Thus, it is certain that the Arab, Persian, and Indian mariners who sailed this route in the 9th century experienced an ocean dramatically more abundant with marine life.

Until very recently many people regarded the world’s fish and whale stocks as inexhaustible. But our observations and experience aboard the Jewel of Muscat seem to corroborate what the scientist have been telling us for years–that the concept of inexhaustibility was, and is, a tragic fiction which we ignore to our, and the planet’s peril.