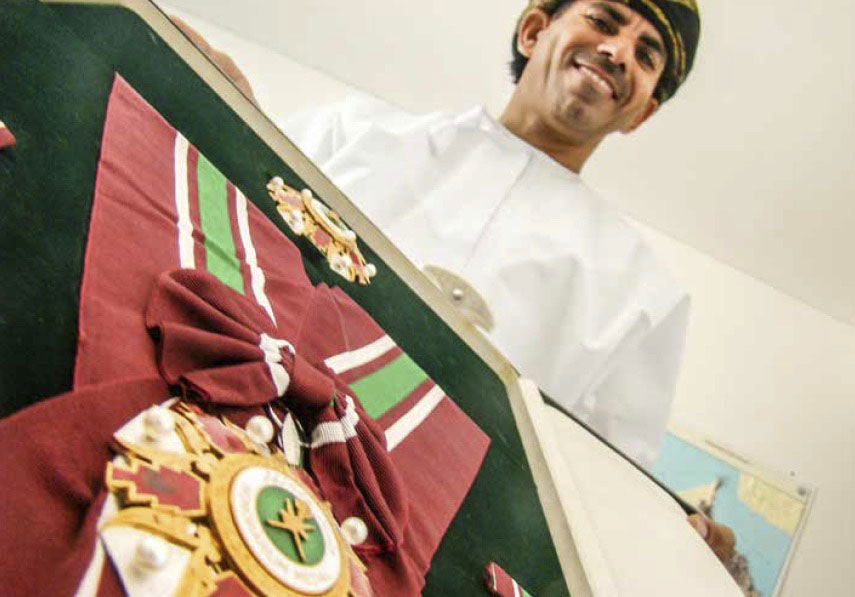 The Medal of Honour bestowed on Saleh Al Jabri by HM Sultan Qaboos, was given to Saleh by His Highness Sayyid Haitham bin Tariq Al Said.

The Medal of Honour bestowed on Saleh Al Jabri by HM Sultan Qaboos, was given to Saleh by His Highness Sayyid Haitham bin Tariq Al Said at his Highness’s office. In attendance were HE Sayyid Badr Hamad Bin Hamoud Al-Busaisi, Secretary General, Ministry of Foreign Affairs Al Busaidi and Rear Admiral Abdullah Bin Khamis Al Raisi, Commander of the Royal Navy of Oman (CRNO)
HE Sayyid Badr said: “This medal is an accolade for all Omanis in general and sailors in particular who have been instrumental in reigniting Oman’s maritime heritage which has been accorded paramount attention by His Majesty Sultan Qaboos. As a result, Oman has participated in many international sporting events and regattas that have culminated in remarkable achievements.”

“The Jewel of Muscat, which is a milestone in the relationship between the Sultanate and Singapore, had a warm and distinguished welcome from officials and the public upon its arrival in Singapore in July. The ship will now be on permanent display at a special Museum as a mark of the distinguished relationship that binds Oman with that part of the world – testimony of Oman’s remarkable achievements over the years in forging diplomatic, trade ties and friendly and relations with that region. The old relations that were forged by our sailors in the past are as strong as ever today during the glorious renaissance of Oman under the leadership of His Majesty Sultan Qaboos,” he added.

Receiving his medal Capt Saleh said: “I am very honoured and I feel like I am the happiest man in the world to be honoured by His Majesty with this honorarium medal. The Jewel of Muscat demonstrates His Majesty’s wise vision and recognition in promoting Oman’s rich and authentic maritime heritage. I am very grateful to HM for this honour and I share this honour and achievement with all my crew members and the Jewel of Muscat team. I also share this with all the Omani people for their support during this epic journey.”

When asked what he planned next after Jewel of Muscat’s voyage Saleh said: “Jewel of Muscat has taught me a great deal about how our forefathers used to sail on the ancient dhows. Through sailing on Jewel I have re-lived the pride of our forefathers. As a senior instructor at the Oman Sailing School we aim to establish 7 sailing schools on the coast of Oman. I now look forward to sharing my experience of traditional and modern sailing with the younger generation. I believe that sailing is in the blood of Omanis and I am confident that the upcoming generation will continue this legacy.”