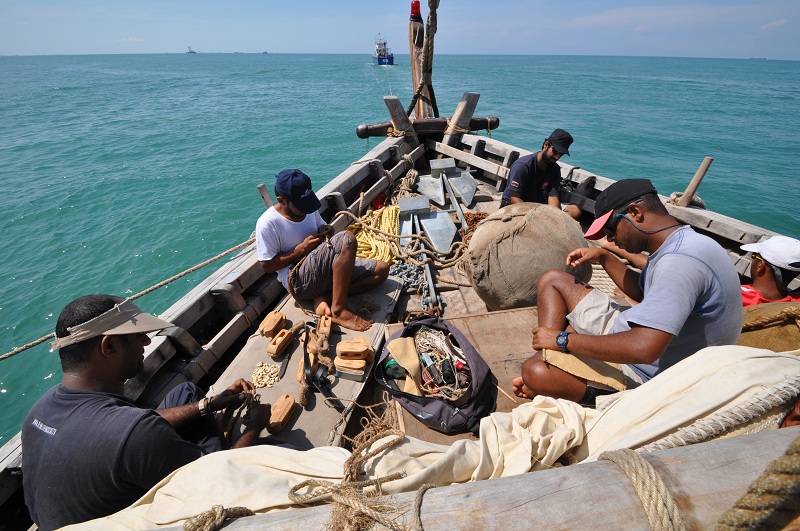 The consistent breeze of yesterday gave way to doldrums shortly after midnight. By 0800 the current had actually pushed the ship back to its 0200 position. In the 9th century, sailors would have simply accepted this situation and waited until the wind picked up–as we on the Jewel of Muscat have done many times. On this leg, however, we have a specific arrival time in Singapore so we do not have a choice to wait for the wind. With over half the leg still remaining and only two days to complete the distance, we decided at 0830 to connect a line to our escort vessel and have it tow us until such time as the wind increased sufficiently to permit us to sail. But the wind remained calm longer than we expected so the tow lasted off and on throughout the day. In the evening we anchored in shallow water in the hope that conditions would improve by morning. Around 2100, a storm moved in bringing heavy rain, strong winds, and spectacular lightning and thunder which lasted until 0400.

We remain anchored under cloudy skies, waiting until dawn before deciding how we shall proceed.

Before we reach the end of our voyage, there is just time to present several crew members who were not introduced in previous logs.

Alessandro Ghidoni studied archaeology at the University of Bologna and first came to Oman as a member of the Italian archaeological expedition to Ras Al Hadd in 1998-99. After being introduced to Dr. Tom Vosmer, Alessandro began studying Bronze Age reed ships and participated in the reconstruction of three such vessels–Magan Boats I, II and III. In September 2005, he and seven other crew members attempted to sail Magan III from Sur, Oman to Gujarat, India. Although the voyage ended prematurely, a great deal of valuable information was gained from the project. Alessandro believes that it is only by using ancient techniques and materials that we can begin to understand and appreciate the knowledge and skills that ancient people possessed.
In September 2008, Mr. Ghidoni accepted an invitation to join the Jewel of Muscat project and moved to Qantab, Oman to begin his work as documentarian. Since that time, he was involved in every aspect of the ship’s construction, and he has served as crew member and technical specialist for the entire voyage.
Luca Belfioretti also earned his degree in archaeology from the University of Bologna and has worked extensively on surveys and excavations in Italy and Oman. He, too, participated in all the Magan Boat projects, including as a crew member in September, 2005. Mr. Belfioretti was the Site Director during the construction phase of the Jewel of Muscat. After both masts were damaged during a storm on the way to Sri Lanka, Luca and his top carpenters worked tirelessly for weeks to find, shape, and install the two teak replacement masts which successfully carried the Jewel of Muscat through even stronger storms during its crossing of the Bay of Bengal. Luca joined the ship’s crew for the passages from Galle to Penang and from Penang to Port Klang. He is currently in Singapore working on the logistical preparations for the ship’s arrival.

Michael Lithgow is the son of a chief engineer in the Royal Navy and grew up in Portsmouth, Singapore, Sydney, and Glasgow. After leaving school he worked in a variety of jobs related to the sea including boat fitter, deck-hand, and eventually as captain of a tugboat operating out of Portsmouth. In 1979, Mr. Lithgow decided to leave this tugboat and study film-making and photography at the University of Westminster. Since graduating, he has produced films for the BBC, Channel 4, Discovery, ABC Australia, and National Geographic–for whom he has been filming the voyage of the Jewel of Muscat since he came aboard in Galle, Sri Lanka. He loves the story-telling aspect of documentary film work. On this voyage, he is fascinated by how the crew has adapted to the unique challenges of living aboard the Jewel of Muscat, and in doing so, how they have come to appreciate 9th century seafaring. “I’ve realized that in its day, this was a state-of-the-art ship which incorporated thousands of years of design and construction innovation. It is a joy to sail–when there’s wind.”

Eric Staples is an American who spent nine years of his childhood living on a sailboat in the Caribbean and Mediterranean Seas. After receiving his undergraduate degree in archaeology, he earned his Ph.D in Islamic Maritime History from the University of California at Santa Barbara. He joined the Jewel of Muscat project in June, 2008 as Documentation Manager, and has also served as Starboard Watch Leader for the entire voyage. Mr. Staples regards the Jewel of Muscat project as a magnificent learning opportunity because he has been able to experience important aspects of sailing in the Indian Ocean that he had previously only read about–such as the timing and nature of the monsoons, and the wind and current patterns in the Straits of Malacca. In addition to gaining valuable knowledge of 9th century ship design, construction, and sailing capabilities, Eric has focused considerable attention on studying the celestial navigation techniques used by early Arab mariners. He views the Jewel of Muscat project as immensely successful thus far, and is confident that future publications and documentaries about the project–along with the displaying of the Jewel of Muscat in a museum–will make an important long-term contribution to public education.

Robert Jackson is an American who earned his graduate degrees at Columbia University and St. John’s College. He is the author of At Empire’s Edge: Exploring Rome’s Egyptian Frontier, and has lived in Oman for ten years, teaching history at The American International School of Muscat (TAISM). Given his interest in the history of Indian Ocean trade, he was thrilled to accept an invitation to sail aboard the Jewel of Muscat for its entire voyage. In addition to his work as crew member, Mr. Jackson serves as the ship’s photographer and writes the daily log for the project website.