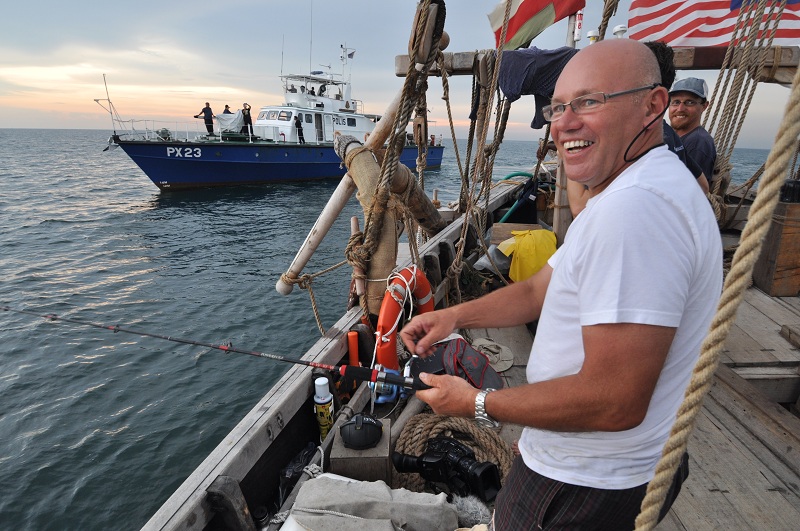 At last a day of fair winds which have brought us almost halfway to Singapore. Even with good winds, however, our speed is checked by the necessity of frequent tacks (i.e. changes of direction). The Straits of Malacca are narrow, but unlike 9th century mariners, we are confined to an even thinner corridor between the major shipping lane and the west coast of Malaysia. Within this corridor we must contend with anchored ships, strong currents, floating oil platforms, islands, enormous sand-barges, and ever-changing winds. Whereas on earlier passages we might tack twice in a day, on this leg we are sometimes tacking a dozen times per watch. Needless to say, the crew is working very hard for every kilometer gained. But we’re making progress and every day brings us closer to our goal.

One indication of our progress was when our Malaysian escort ship, the PX 23, reached the limits of its patrol jurisdiction and passed us on to a new escort, the PX 19. Before it departed, however, PX 23 radioed that it wanted to come along side to give us a present. As they cut across our stern, Michael Lithgow accidently caught their hull with the fishing lure he had been trolling unsuccessfully all day. Fortunately, he managed to free the lure without difficulty as the ship came close to our starboard side. Said Al Tarshi tossed the PX 23 a heaving line and hauled in a heavy plastic bag containing their gift–two dozen fresh fish. Now a debate is raging amongst the crew of the Jewel of Muscat – should we permit Mr. Lithgow to claim that he “caught” the two dozen fish?