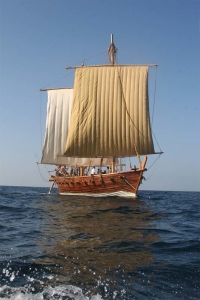 Today was relatively routine aboard the Jewel of Muscat. Maintenance work was done on some rigging and a small separation along the edge of the mizzen sail was repaired. More complicated was the partial repair of the main electric bilge pump, which stopped working several days ago. Apparently it broke during one of our recent squalls when two bags of gravel, which we use for ballast, shifted and landed on the bilge pump. After considerable effort, and some rather unpleasant sloshing about in bilge-water, Luca Belfioretti and Mylai Prabhakar managed to get the pump going again. Its automatic switch was beyond repair, however, so the device must now be turned on manually.

As we enter the channel between Great Nicobar Island and Sumatra, the shipping traffic has become heavier. We are staying slightly north of the main shipping lanes but we must keep a close look-out for ships 24 hours a day.

Catalina Roca of Sintra, Portugal–one of Europe’s great maritime nations–wrote to ask why the Jewel of Muscat has rectangular sails rather than the triangular (i.e., lateen) sails more commonly associated with traditional Arab ships.

It is an excellent question and it focuses on one of the defining characteristics of the Jewel of Muscat. In fact, scholars have long debated which type of sail was used on early Arab ships. Contrary to the widely held belief that the triangular sail predominated throughout Arab maritime history, recent evidence argues quite convincingly that the triangular sail emerged only in the past 300 to 500 years. Prior to that–and almost certainly in the 9th century–large Arab ships carried rectangular sails. Considerable iconographic evidence supports this idea, as do numerous texts from the pre-modern period. In 1184, for example, Ibn Sha’ban wrote that rectangular sails were, “the best method of sailing, since they cannot but catch the wind which comes aft of the ship on its course.” In other words, the rectangular sail was ideal for running before the wind–much as the Jewel of Muscat is doing on this passage to Malaysia. Of course the questions remain as to precisely when and why Arab mariners eventually adopted the triangular sail. The traditional view is that triangular sails enable ships to sail closer to the wind, but as we have demonstrated on the Jewel of Muscat, rectangular sails can also be trimmed to sail quite close to the wind.

So, Ms. Roca, although we are quite confident that the ship after which the Jewel of Muscat was fashioned carried rectangular sails, the reasons for the eventual transition to triangular sails on Arab ships require more textual and practical research.