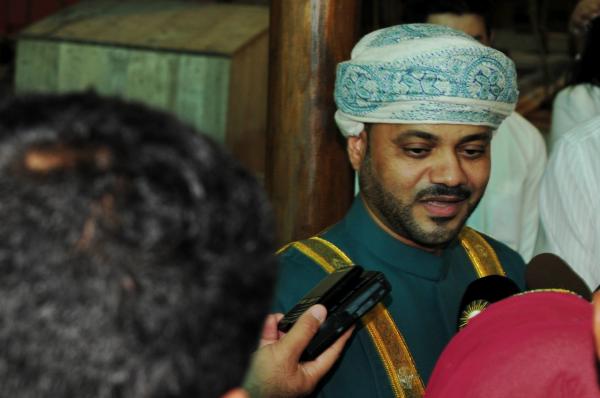 Remarks by Sayyid Badr bin Hamad Albusaidi Secretary General of Oman’s Ministry of Foreign Affairs, Head of Delegation to the opening of the Maritime Experiential Museum and Aquarium (MEMA)

Today represents another milestone in the life of the extraordinary and beautiful ship that is The Jewel of Muscat. And as with every milestone which she passes, today marks not an ending, but a new beginning.

It is now some 4 years since Oman and Singapore signed the Memorandum of Understanding that gave birth to this remarkable project. In that time, as with everyone who gets to know her, the Jewel became our baby. We’ve watched her grow and blossom to take on formidable challenges. Today, with pride and affection, we have come to witness her graduation day.

The opening of this Museum with the Jewel on display, in all her glory, amid all the other splendid exhibits, offers a unique opportunity for visitors to explore and understand the history of the Maritime Silk Route.

That history has much to teach us – how a bold spirit of exploration, trade and cultural exchange can bring peace and prosperity to all involved. How a spirit of openness and a whole-hearted embrace of a diversity of cultures and civilisations can reap a rich reward.

Perhaps one of the greatest contributions of the Jewel of Muscat project is its engagement with schools and youth, linking young people with their history and culture, whilst also offering them knowledge, practical skills and a new range of promising possibilities for their future.

During the Jewel’s epic voyage from Muscat to Singapore, a 9th grade student in Oman posted a message on the Jewel of Muscat website. She wrote: “The Jewel is not just a ship sailing to Singapore, it is a symbol of peace and friendship between countries. It is worth our applause when one country reconstructs the oldest shipwreck in the Indian Ocean, then sails it across great bodies of water just to give it to another nation. Today, while many nations are involved in wars, two countries took an initiative for peace.”

Today we can truly say that the vision of His Majesty Sultan Qaboos bin Said in supporting the Jewel project has been made a reality.

I hope that young people in particular will draw inspiration from the courage, skill, determination and sheer hard work of the many people that made that vision a reality.

Captain Saleh al Jabri and his brave crew battled storms in the Bay of Bengal and dodged giant container ships in the Strait of Malacca to bring the Jewel into Keppel Bay.

We are grateful to friends, colleagues and former colleagues here in Singapore and Oman who helped organize the project and keep it in the public eye.

At the very heart of the Jewel project and this great new Museum lies a vital lesson not just for Oman and Singapore, not just for all the countries where the Jewel was welcomed with such warmth and generosity; India, Sri Lanka, Malaysia, but for all the countries of the Indian Ocean Rim. By bringing together our rich heritage and the blessing of modern science and technology we open up a more promising future. By working together in a spirit of friendship and humanity, using our God given skills, we can achieve great things that benefit us all.