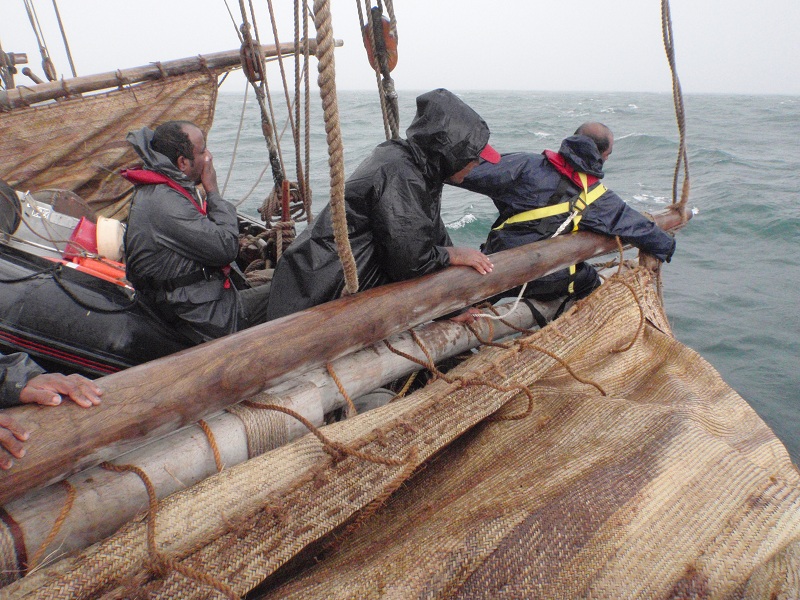 After almost a month of hard work in Galle fitting new teak masts and completing numerous maintenance tasks, the Jewel of Muscat finally cast off from the dock in Galle at 1100. A large crowd of dignitaries, friends, well-wishers, and the Sri Lankan Navy band gathered under overcast skies to bid farewell and fair winds to the ship and crew. After a brief tow out of the harbour and into open water, the crew hoisted the new palm leaf sails, and set a course to the south-south east.

The weather continued to deteriorate from the moment we cast off, and very shortly after raising the sails and waving our thanks to the tow boat crew, we were hit by a squall with 35 knot winds and heavy swells. Based on our experience on the passage from Cochin, the crew lowered both sails and replaced the palm leaf matting main sail with our smaller canvas storm sail. The squall did not last long, but we were bedevilled by rain, changing winds, and large swells throughout the afternoon and into the night. The conditions required frequent raising, lowering, and trimming of the sails–all performed in poor light and on rolling, slippery decks. The crew had been up since 0530 and had eaten only a small breakfast and a boxed lunch of rice and chicken. But when nightfall came, it was still too rough to prepare a hot meal–a disappointment for most of the crew who were by now extremely tired, wet and hungry. The discomfort was greatest, however, for those who were suffering from sea-sickness, but who still had to perform their tasks as best they could. It was a long, long day for everyone, especially for members of the port watch who got only four hours sleep during the night.

In addition to keeping the ship sailing properly in rough seas, one critical responsibility of watches on this leg is to look out for other ships. At the moment (0400) the lights from numerous ships dot our horizon like some great linear constellation. Fortunately, the Sri Lankan Navy has generously provided us with an escort boat until dawn tomorrow, and its presence adds a significant degree of safety as we pass through these busy shipping lanes.

Right now the skies are still heavily overcast, but the rain has ceased. Winds are strong from the SW and the Jewel of Muscat is sailing well under canvas sails at 5 knots. Despite their fatigue, and the rather rough start to this passage, the crew is delighted to be under way and remains optimistic that the winds will remain cooperative throughout the voyage to Penang.