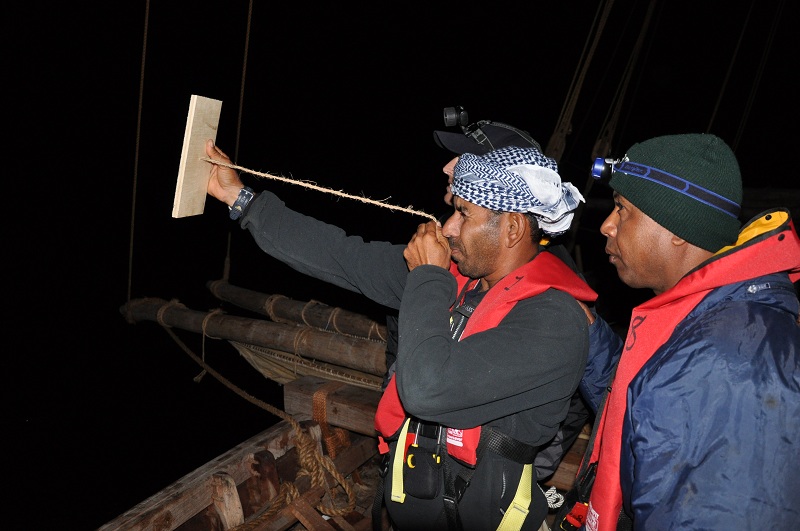 Today is sunny and clear with a light southerly winds. It’s good to see we’re making progress on the map

At 8:50 this morning we sighted a widely scattered pod of dolphins on both sides of the ship. It was difficult to determine what type they were, but they were probably common bottle-nosed dolphins. It is such a delight to see such beautiful creatures in the wild.

Captain Saleh used a kamal last night to determine our latitude. He will use this device every night that the stars are visible and will keep a record of each use. The kamal is a simple but fascinating navigational tool that has been used throughout the Indian Ocean since antiquity. It consists of a piece of card of wood whose length corresponds to a given number of fingers. Thus some kamals represent either four, six, eight, or even thirteen fingers. In the centre of the piece of wood, is a small hole through which a string passes.

To use the device, a navigator holds the string in his teeth and moves the kamal forward until the bottom of the card aligns with the horizon and the top aligns with a given star such as the North Star. He then marks this position with a knot in the string. Over time, experienced navigators determined a reliable record of the latitudes of the various ports and islands they visited.

Of course this method was only used to measure latitude–degrees north or south. (Measuring longitude–degrees east or west–with precision remained a scientific challenge until the invention of the chronograph in 18th century.)

The invention and long use of the kamal is another example of how ancient Arab mariners built their vast store of knowledge about astronomy and navigation.