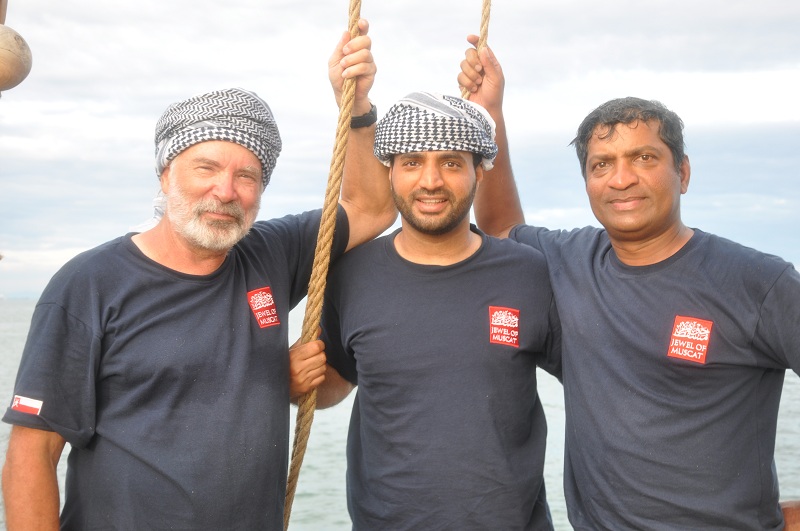 A gloriously bright and beautiful afternoon saw the Jewel of Muscat slip away from its berth at the Royal Selangor Yacht Club to the cheers of hundreds of well-wishers. Since the yacht club is situated approximately twenty miles up the Klang River, we were towed through a labyrinth of anchored tankers and massive container ships into open water.

As we expected from recent weather reports, the winds are moderate, variable, and generally south-easterly. In other words they are blowing in the wrong direction. This situation has required that we do a great deal of tacking back and forth from east to west in order to make any headway. A late night squall and persistently strong currents have also influenced our progress. It is now nearly 0600, and after nearly twelve hours of laborious sailing, we are only ten miles from the point at which we first hoisted our sails last evening. But we continue to harness what winds we can and hope that we’ll soon enjoy more favourable weather.

On this final leg from Port Klang to Singapore, we are happy to have been joined by the following new crew members:

Zakariya Al Saadi serves as Counsellor in the Secretary General ‘s Office of Oman’s Ministry of Foreign Affairs. In this capacity, he has been deeply involved in the Jewel of Muscat project since its inception in 2006 and has worked closely with his Singaporean counterparts to make the project a reality.

The Omani Ministry of Foreign Affairs generously funded the entire construction phase of the Jewel of Muscat and Zakariya Al Saadi H.E Sayyid Badr, the Ministry’s Secretary General, and H.E Ambassador Lyutha Al Mughairy have taken a deep personal interest in the project. Their tireless support and encouragement have been vital to the success of the voyage thus far.

Dr. Tom Vosmer is an archaeologist, maritime historian and renowned boat/ship builder. He has been involved in numerous archaeological surveys, excavations, and maritime projects in Oman since 1979. In 1980 he helped build the sewn-plank ship Sohar, then served on its crew during its successful voyage from Oman to China. (See The Sinbad Voyage by Tim Severin.)

Dr. Vosmer has served as Construction Director for the Jewel of Muscat from the beginning, and is fondly referred to as “Abu Saffina (Father of the Ship)” by the ship’s crew. Asked to comment on his joining the crew for this final leg to Singapore, he stated, “It is exciting to be on board and to feel the movement of the sea beneath my feet again. It seems like yesterday that we first laid the keel for the Jewel of Muscat, and now she has crossed the Indian Ocean and is on the way to Singapore–fabulous. Seeing this crew working so well together, and knowing what trials and hardships they have faced since leaving Muscat, I am filled with a deep respect for them. I also feel a profound sense of satisfaction that the great efforts of so many people will soon be fulfilled when we enter the harbour in Singapore. I and everyone involved in this unique and special project will remember it always.”

Ananda Kumar hails from Malaysia and has had a deep love of the sea since childhood. He earned his Master’s Degree in Nautical Studies in 1982 via a special program sponsored by Neptune Orient Lines (NOL) in Singapore. After receiving his degree, he worked at NOL in Singapore for 17 years before joining “Sea Consortium”–also in Singapore. In 2000 he finally returned to Malaysia to direct the Malaysian branch of “Sea Consortium.” The company’s primary activity is “feedering”–moving bulk cargo and containers from the smaller ports of Malaysia to those ports large enough to accommodate massive cargo ships capable of carrying 6,000 or more containers. Mr. Kumar has been intimately involved in the logistics surrounding the Jewel of Muscat’s stay in Malaysia and, as an avid sailor with valuable experience in the Straits of Malacca, his knowledge will be particularly valuable during our voyage to Singapore.

The crew of the Jewel of Muscat offers their warmest welcome to each of its new members.