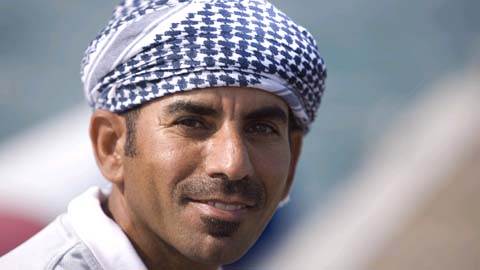 Saleh al Jabri, Captain of the Jewel of Muscat

I was feeling really nervous as we left harbour, a lot of things might have gone wrong. But the first sea trial was excellent, things went really well

We started off under tow with a steering test – she responded well so we pushed on and hoisted the main sail.

She handled really well – just little touches on the steering system and she responded beautifully. I was worried she might be heavy to handle, but she was really light. Usually square rigs like the Jewel have trouble getting close to the wind, but we could get her really close to the wind 75 degrees or so. We tried some tacking and she performed perfectly.

The wind was gusting around 9 knots and downwind we were making 2.2 knots, which is fantastic. Those guys in the 9th century they knew how to build a ship!

I’m so proud of the crew and everyone that built the Jewel. We’ll have another trial on Wednesday and then we can start training the crew.

The excitement was incredible – here was a ship from the 9th century back sailing again off the coast of Oman. Two yachts came by and when they saw her they came close by and they were saying “Wow! What a beautiful ship!” I really feel Oman’s maritime heritage is alive again now – it hasn’t gone away – it’s alive and well and sailing down the Oman coast.