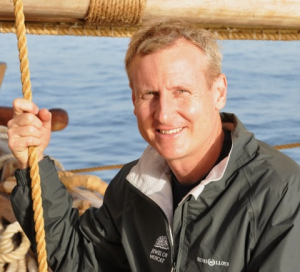 The ship sailed smartly east along the coast yesterday afternoon, but a lack of wind in the evening inclined Captain Saleh al Jabri to decide that we should drop the sails and set anchor for the night. This gave the crew a chance to conduct a “man overboard” drill and review emergency first-aid procedures.

Once the ship was in order, Ahmed Al Adawi and Adam Al Baluchi prepared a delicious meal of lamb kebabs and chicken (grilled over charcoal in the ship’s authentic wooden cook box), salad and fruit. The crew leavened the meal with friendly banter and conversation as they sat together under the stars. At 2100 hours, First Mate Khamis Al Hamdani issued the watch schedule and the crew settled in for a night’s rest—some choosing to use the canvas bunks below decks, while the majority opted to sleep in the open air on deck.

Today began at 0530 with a special visit to Jewel of Muscat by H.E. Sayyid Badr, Secretary General of Oman’s Foreign Ministry. His Excellency has been a generous and enthusiastic supporter of the Jewel of Muscat project since its inception, and today he came aboard with a sumptuous breakfast to share with the entire crew. As the dawn light spread majestically across the horizon, a gentle breeze arose and the Jewel of Muscat sailed quietly westward. Everyone on board sat together upon the deck to enjoy the bountiful meal. Once breakfast was complete, His Excellency, accompanied by Captain Saleh, toured the ship, asking questions about the vessel’s construction, the provisions she will carry, and about traditional navigation.

The end of this two-day sea trial marked the last time the Jewel of Muscat will sail before its departure for India on February 16th. Captain Saleh was pleased with the results of the trial and stated that he and the crew had gained valuable knowledge about the vessel’s handling characteristics in a variety of sea and weather conditions. “Ships have unique personalities,” he said, “and it’s important that we know each other very well before setting out on a long trip like this one. She is a strong ship and she handles well—I am confident that together we shall make this a successful voyage.”

Over the next six days, we will devote ourselves to making the final preparations for the voyage. The sense of excitement is palpable among us. Although we realize that the voyage will entail many physical and mental hardships, we know it will also be the greatest adventure of our lives and we are determined to face whatever challenges might lie ahead.