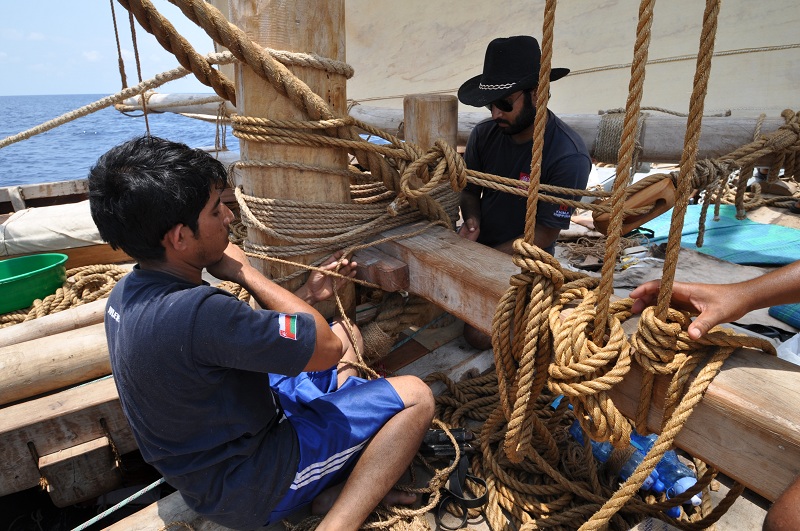 Today began with only a light breeze, so the ship poked along at less than two knots for several hours. By late afternoon, however, the skies began to darken and the winds picked up–propelling the Jewel along at a more dignified rate of four knots

Heavy clouds to the northeast hinted that we might be in for rain, so the crew made all the necessary preparations including securing all gear on deck, partially closing the hatches, and, most importantly, covering the crews’ bunks below decks with plastic sheeting. So far, however, the rain has held off and we hope it will continue to do so. Sailing in the rain isn’t a problem, but trying to sleep in a sodden canvas bunk is rather unpleasant. In addition, one of our goals for the voyage is to record nightly kamal readings for ten stars, and we can’t very well do that with a sky full of rainclouds.

Tonight’s dinner was especially festive in celebration of the 40th birthday of Eric Staples, our esteemed Starboard Watch leader. After a meal of rice with vegetables and corned beef, we all enjoyed a round of fresh Indian oranges – “much better than cake” according to Eric. The crew joins Eric’s family, loved ones, and friends around the world in wishing him many happy returns of the day.

Yesterday’s log introduced Tuanie Ismail as new member of the crew. Today we can introduce the second new crew member, Geoffrey Dobbs. Geoffrey joined the crew of the Jewel of Muscat in Cochin, and will sail with us to Galle, where he lives and owns two hotels. He also directs the charity “Adopt Sri Lanka” which is engaged in marine and coastal conservation, and he runs a “twinning” program which connects Sri Lankan schools with schools around the world.

Geoffrey has a natural love of water and spends as much time as he can in or near the sea. Geoffrey is a keen enthusiast for traditional boats. “I have had a Chinese Junk in Hong Kong for over 25 years and was a member of the 1995 expedition sailing a bamboo raft across the Pacific Ocean to prove the Chinese reached America before Columbus.”

When offered a position on the Jewel of Muscat, he jumped at the unique opportunity. “My younger brother Peter had had a similar opportunity to sail aboard the Sohar, a reconstruction of a traditional Arab boum, from Muscat to China in 1980–tracing the journey of Sinbad the Sailor. That project was tremendously successful and, like the Jewel of Muscat, it was generously funded and supported by the government of Oman.”

Geoffrey Dobbs was educated at Trinity College, Dublin and Trinity Hall at Cambridge University. He then spent twenty-five years running a trading company in Hong Kong before settling down in Galle, Sri Lanka. After he arrives in Sri Lanka on the Jewel of Muscat, he hopes to rest for a few weeks before setting out on some other sea-borne adventure.