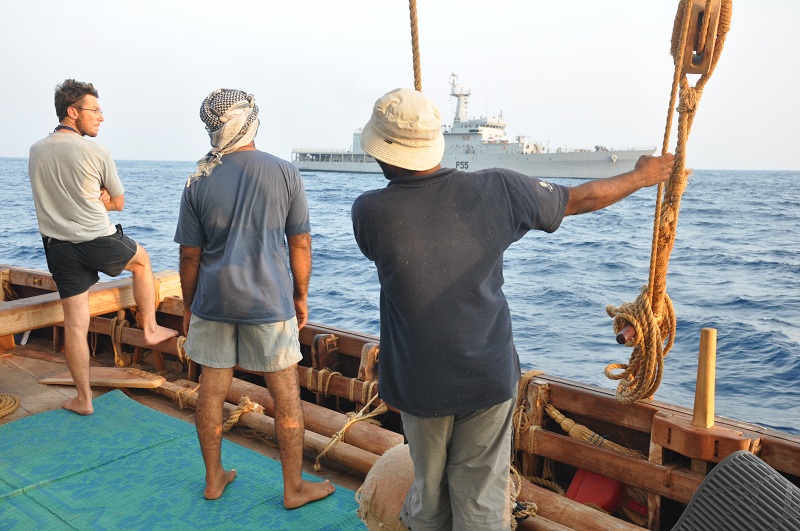 Crew watching the arrival of an Indian naval vessel

The morning began with a surprise visit by an Indian naval ship. Two officers from the vessel came aboard the Jewel of Muscat to greet Captain Saleh and the crew, and to kindly deliver gifts of cake, Indian snacks, and cold sodas. In return, Captain Saleh gave them gifts of Omani halwa, dates, and frankincense. Both crews offered rousing cheers of thanks and farewell to each other as the Indian officers returned to their ship.

Friday is a holiday aboard the Jewel of Muscat, so the crew engaged only in the essential work of sailing the ship. After the doldrums of the past two days we were delighted to notice the breeze picking up, and for much of the day we sailed at a respectable 2 knots. Towards late afternoon, however, the winds increased in speed, but blew in the wrong direction–forcing us onto a more southerly course than we need to reach Cochin. Since our arrival date and time is now fixed–0800 March 15–we will need favourable winds for the next two days if we are to get to the port on time. Although we are still struggling to avoid moving further south, we know from experience that the winds can change dramatically in only a few hours, so we are still optimistic that we shall enter Cochin harbour bright and early on Monday.

Cochin is a major port city in the state of Kerala, and has served a vital commercial and strategic role since the building of the port in 1341 CE. The importance of Kerala, however, extends much further back in history and is well-documented in ancient sources. Among the region’s notable exports were hardwoods such as teak (which was used extensively in Omani ship-building), fine cotton cloth, and spices–especially pepper. The variety of pepper grown in Kerala is Piper Nigrum (black pepper), and the ancient Romans developed a strong appetite for this exotic product as early as the 1st century BCE. An early Tamil Sangam poem states, “. . . the flourishing town of Muzuris

[modern Pattanam], where the large beautiful ships built by the Yavanas [foreigners] came with gold, disturbing the white foams of the fair Periyar [nearby river] ] and returned with pepper.” Indeed, archaeologists have discovered large quantities of peppercorns at major, Roman-controlled ports along the Red Sea coast. At that time, pepper was so valuable that a merchant could make a fortune by successfully importing even a few crates of Kerala pepper. But success was far from guaranteed. Many ships were lost at sea, pirates preyed on vessels involved in Rome’s Indian trade, and thieves attacked the camel caravans which carried pepper and other Indian goods across Egypt’s Eastern Desert. The pepper that did arrive in the Roman world was used in cooking and as a religious offering to the Roman gods. For example at the 1st century CE Serapis Temple in Berenike Egypt, archaeologists recovered thousands of peppercorns which appear to have been burned in a ritual offering.

Thus, for over two thousand years, Kerala has produced one of history’s most important spices. While the Jewel of Muscat is resting in Cochin harbour, its crew will engage in an activity familiar to ancient Greek, Roman, Chinese and Arab seafarers–exploring one of Kerala’s famous spice markets in search of the world’s finest pepper.