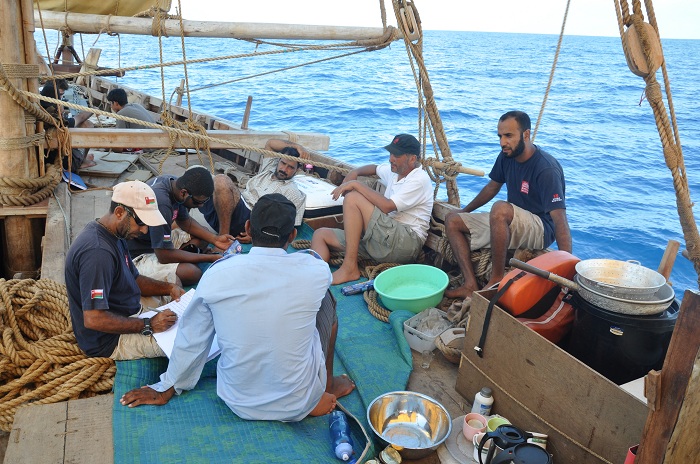 Jewel nears the island of gems

Friday is always a much welcomed rest day aboard Jewel of Muscat. Most of the crew were still quite tired from their long hours of hard work over the past two days. But even on “rest days” the ship still needs to move, so from time to time the crew was engaged in raising, adjusting, or lowering sails.

The weather continues to be ever-changing. The winds picked up at about 7:00 and a large cloud front hinted at rain. We lowered both sails as a precaution, but the front passed us by. The remainder of the day was sunny with light breezes, but by 17:00 a heavy front appeared to the south-south-west, and by 20:00 we were caught in a driving rain. As happened twice during heavy rains in Cochin, water collected quickly on deck and needed to be swept by the crew toward the “scuppers” (drainage holes) on each side of the deck through which the water could drain off. Doing so helps reduce the amount of water that leaks into the crew/cargo area below decks. Fortunately, the rain didn’t last very long so by 21:00 we raised the sails again and continued on our way under partly starry, partly cloudy skies.

Jewel of Muscat is just over 100 nautical miles west of Galle. Depending on the winds and weather, we should be close to Galle by tomorrow evening (April 18). We are all excited to see the fabled, rich land which Arab sailors and merchants called “Serendib,” and which later Europeans referred to as “Ceylon” (The island’s name was officially changed to the historically more accurate “Sri Lanka” in 1972.)

Given its location in the heart of the Indian Ocean, and its many resources, Sri Lanka has been an important trading nation for many centuries. Merchants from all over the world came to the shores of this beautiful island to purchase ivory, spices and, most importantly, gem stones. Ancient Greek, Roman, Indian, Arab, and Chinese texts all refer to the abundance and desirability of the island’s gems, especially its rubies and sapphires. In 1292, Marco Polo wrote that Ceylon was “…the finest island in the world, and from its streams come more beautiful and valuable rubies than are found in any other parts of the world. Likewise sapphires, topazes, amethysts, garnets and many other precious and costly stones.” Fifty years later, the great Moroccan traveller Ibn Batuta recorded, “All the women of Serendib posses necklaces of precious stones of diverse colours. They wear them on their hands and feet in the form of bracelets and anklets.” Although ancient Arab ships from the 7th century onward landed in Galle seeking fine gems to enrich royal courts and adorn their womenfolk, it is unlikely that the crew will be stowing boxes of rubies and sapphires into the hold of Jewel of Muscat–perhaps to the regret of the crew members’ wives.