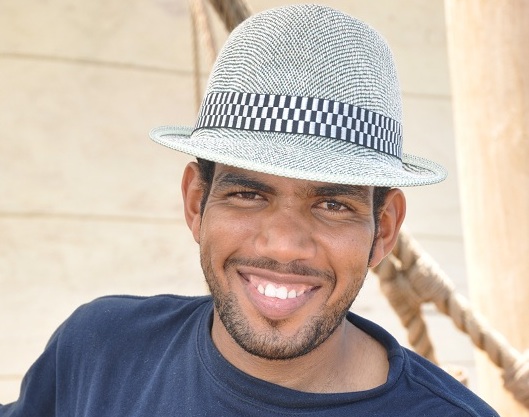 Growing up with the sea

My family comes from Sur and Qalhat in Oman so I grew up on the sea. My father was a fisherman before he entered the Army and I used to enjoy going out with him to set his nets. I still like to fish, but unfortunately the seas off Oman have been over-fished so there aren’t nearly as many fish today as there were ten years ago. This makes it hard to earn a living as a fisherman.

When it came time for me to decide what to do as a career, I chose to study carpentry at the Vocational Technical Center (VTC) in Seeb. At the time, I had no real interest in building boats, but after I had been at VTC for several years, a friend told me that a group of people in Qantab was planning to reconstruct an ancient Arab ship using a sewn-plank technique, and that they were looking for good carpenters. This was quite intriguing to me so I visited Qantab and met Dr. Tom Vosmer, the construction director, and expressed my interest in working on this ship. The next thing I knew, I was hired and I began building the vessel that would eventually be named the Jewel of Muscat.

I must say that the work was very difficult at times, but I liked what I was doing. I also knew I was learning a great deal every day about carpentry and shipbuilding. I especially enjoyed the challenge of helping to build the masts and the enormous quarter rudders. I even learned how to sew the heavy canvas sails.

After many months on the project, I was sent to Zanzibar for two months to learn how to make traditional sails out of palm-leaf mats. I had never been to Zanzibar and I enjoyed seeing such a beautiful country–and one that has played such an important role in Oman’s history. The only thing I didn’t like was contracting malaria, but I recovered from that fairly quickly. Someday I’d like to go back to Zanzibar–perhaps on a sailing ship.
At the time I was helping to build the Jewel of Muscat, I had no idea that I would eventually be able to become a member of its crew. But they needed carpenters on board, and when the ship was nearly complete, they asked me if I would like to sail to India. I was overjoyed at this invitation because I had come to really love this ship, and by becoming a crew member, I could combine my two great interests–the sea and carpentry. As it turned out, one of the other carpenters could not join the crew, so I was asked to sail not just to India, but all the way to Singapore. Of course I said ‘Yes’ immediately.

So far, the voyage has been an exciting adventure for me. Yes, it is dangerous at times and not very comfortable–and I miss my family very much–but I have learned so many new things and seen so many interesting sights that I know the hardships are worthwhile. In Sri Lanka I got to see a rain forest, beautiful green snakes, and monkeys – all for the first time. I also feel like my work is helping to make this voyage successful and that’s a good feeling. The other day, for example, we were taking on water because of the rain and high waves, and both manual pumps were broken. I was able to work with Ahmed Al Balushi to repair the pumps so we could remove the water from the ship and I felt proud of that contribution.

When this voyage is over, I would like to continue to expand my knowledge and develop my skills as a traditional boat builder. I’d like to build a Badan, a Battil, or even a large Boum of the kind in which Omanis once sailed all over the Indian Ocean. But until then, I am happy, proud, and very grateful to be aboard the Jewel of Muscat. It is a unique ship and everywhere we go people come to see it, take photos of it, and ask us about what it’s like to sail a 9th century ship. I know we still have a long way to go, but we are now half way across the Bay of Bengal and we shall continue to do our best as a crew. God willing, we shall arrive safely and on time in Singapore.