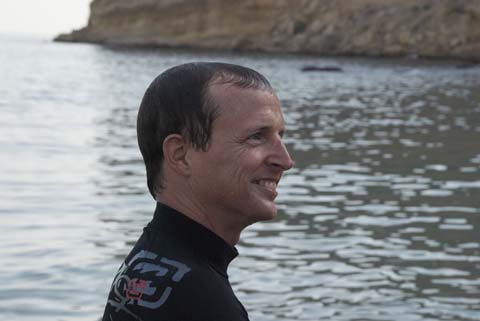 “They started pushing and the next thing we know the boat just takes off incredibly fast. The dive unit were swimming as fast as we possibly could to keep up with her. While we were swimming I was thinking ‘Why didn’t anyone tell me we were doing the fast launch option?’ Because there was actually an option for the launch where we were going to shoot her down the track and let her go, but I didn’t know we were going to do this! When we finally got there and caught up with the ship there was all kinds of debris around, the wood we had used for chocks, cushions and the rest, but she was fine.

The cradle was actually about 12 metres beyond the track, but she came out of the cradle very nicely. One issue was that we didn’t have a rope on the ship itself only the tow rope on the cradle and she started drifting back. So we dived down and dropped all of the cradle arms so she wouldn’t hit them. She might actually have hit the aft anchor post for the winch cable on the cradle on the port side, but I inspected it and there was no damage. It was a little chaotic in the beginning to figure out what the ship was touching or not touching. She was actually resting on one cradle arm, but we were able to get her off.

And then, later we got to ride her and she really is a nice ride, a wonderful ship. We basically spent a year working on her in the boatyard and then suddenly to have her moving in the water – it’s great. It’s such a beautiful sea here, so crystal clear, and it’s a wonderful day today with bright sun. So it’s a pretty incredible experience overall.

And now I have to start catching up on my notes. In the last 3 days I’ve been so busy I haven’t written a single note. So it’s back to the notebooks!