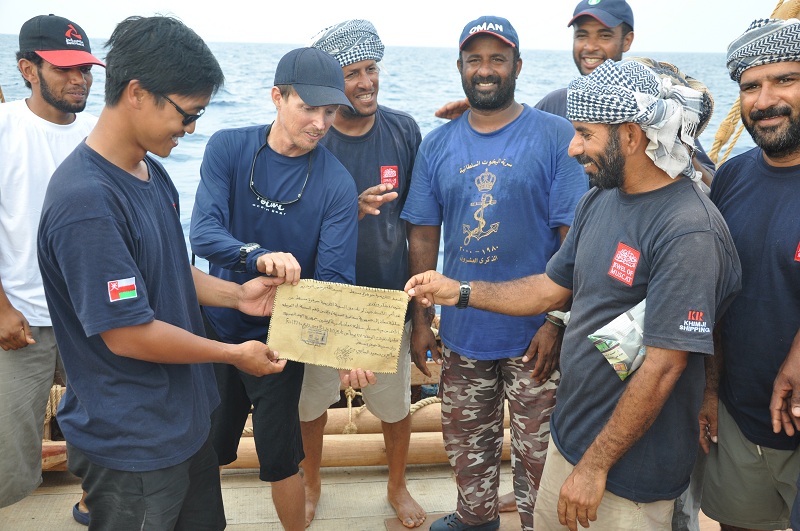 End of the leg

The crew of the Jewel of Muscat make final preparations to land in Cochin, with mixed feelings

A busy and exciting day aboard the Jewel of Muscat, as we make good progress towards Cochin. In preparation for our arrival the crew spent much of the day cleaning, organizing and stowing gear, and generally getting the Jewel of Muscat “ship shape.” Several low-flying visits by Indian Coast Guard airplanes made the dream of our impending arrival all the more real.

The crew is experiencing a mixture of feelings tonight. On the one hand we are filled with elation at the prospect of setting foot on firm ground after 27 days at sea. In addition, it will be wonderful to see friends and loved ones again, and to enjoy the welcoming festivities planned for the Jewel of Muscat.

But underneath all this anticipation is a touch of sadness that the first leg of our long voyage is nearly over, and when it ends two members of the crew will depart.

Jeff Khoo who contributed in so many ways to the success of this voyage, and whose friendly, curious, and knowledgeable personality will be greatly missed by everyone, will return to his work at the Singaporean Foreign Ministry. Mateo Willis, our intrepid and highly talented video cameraman will also leave the ship in Cochin, although we are delighted that he will return to the Jewel of Muscat on a later leg.

As one can imagine, very strong bonds of respect and friendship are formed when seventeen men struggle together towards a common goal like sailing a 9th century ship across the Indian Ocean. Jeff and Mateo have played vital roles during this voyage, and all of us on the crew share a deep sense of appreciation for their efforts.

Tonight is also a special one for Captain Saleh who has borne the responsibility of leadership through all the high and low points of the Indian Ocean crossing. You can read his thoughts in his log.

Given our impending arrival in Cochin, this will be the last daily Ship’s Log for this leg of the voyage. New logs and photos will be posted, however, to keep you informed about the special welcoming celebrations that will go on for the next several days, and about the progress of various maintenance projects planned for the Jewel of Muscat while she is Cochin.