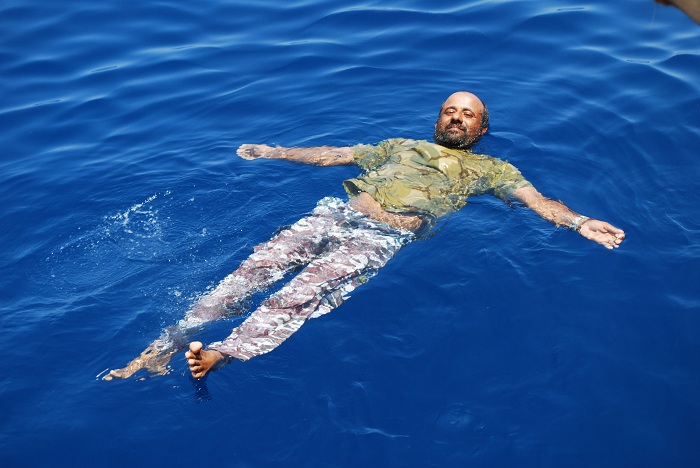 Hussein finds relief from the heat

We remain becalmed on a glass-like sea between Suheli Par and Kalpeni in the Lakshadweep Archipelago. The heat in these lower latitudes is now becoming a major factor in the daily life of the crew because it is so enervating, and because it makes sleeping difficult. Indeed sleeping below decks is nearly impossible during the day for which ever group is off watch, and shade on deck is scarce. But this is life at sea, and sailors have endured the uncontrollable cycles of calm and tempest, heat and cold, comfort and discomfort since they first ventured onto the ocean.

After conducting a “man overboard” drill, the main activity this morning was to inspect the underwater portions of the rudder and the ship’s hull. Given the heat, nearly the entire crew volunteered enthusiastically for some aspect of this job. Fortunately, they found that both the rudder and hull were in excellent condition. We also discovered a much greater variety and concentration of marine organisms have attached themselves to the hull than we had seen before. These include a dense growth of algae, feather-shaped barnacles, and numerous small crabs. Small pilot fish were also abundant resting in the shade of the ship.

Ms. Sarah Donohue from Vernon Connecticut (USA) has asked whether we have seen much pollution on the voyage, and how many other ships we see in a day. We have seen very little flotsam thus far in the open ocean. That said, the coating of oil on the Bridled Tern that landed on the ship the other day is evidence that an oil spill of unknown size might be in the vicinity. Unfortunately, the amount of flotsam will almost certainly increase as we get closer to land.

Regarding the number of ships we have seen, we estimate that we have encountered 30-40 thus far. But although we saw more ships at the beginning of the voyage, there have been many days when we saw none. Of those that we have seen most have been at a great distance. Only once did a ship come close enough for us to contact it via VHF radio and request that it alter its course slightly. Thank you for the question Ms. Donohue. We understand that today is your birthday, so please accept congratulations and best wishes from the entire crew of the Jewel of Muscat.

We are currently about 200 miles from Cochin, but under our current circumstances it is difficult to estimate when we shall arrive there. We have learned to be patient, however, so as the sunset inflames the western horizon, we look forward to a slight respite from the day’s heat and the coming of a favourable breeze by dawn.