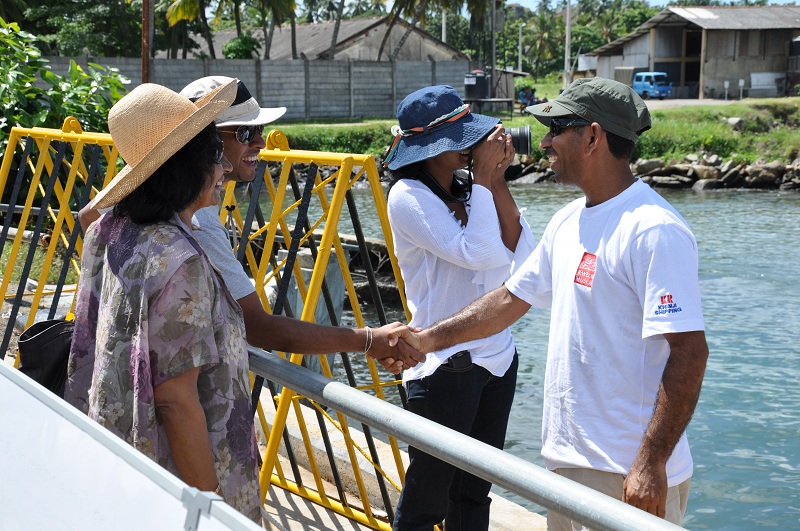 It might have been May Day, a national holiday in Sri Lanka, but the crew of the Jewel of Muscat was busy none-the-less. Their first task was to unload two new sails which arrived this morning in forty foot fibre-glass tubes. The sails were woven from palm leaves by traditional weavers in Zanzibar with the assistance of crew member Fahad Al Shaibi. Up until Galle we have used canvas sails on the Jewel of Muscat and they have proven to be reliable and highly effective. In the 9th century, however, it is most likely that the sails on Arab ships were made from palm matting such as those that arrived today. In the interest of historical research, we shall use these woven sails intermittently for the remainder of the voyage to test their strength and handling characteristics.

Of course sails need to be supported by masts and we received good news regarding the two new masts which need to be fitted prior to our departure for Malaysia. Crew members Luca Belfioretti and Alessandro Ghidoni finally succeeded in finding two teak trees of the appropriate size north of Colombo. The trees will be felled tomorrow, then transported to Galle later in the week. Once they arrive, carpenters Babu Sankanran, Pushpadas Krishnan, and Sajid Valappil will set to work transforming the rough-cut logs into 17-metre masts.

One of the pleasures of being in port is meeting the many visitors to the Jewel of Muscat who come to learn about the ship and its voyage. A series of information boards and photographs set up next to the ship describe its construction, historical significance, and its itinerary. In addition to the information boards, crew members are often on hand to respond directly to the many questions visitors ask and, if appropriate, to provide them with a quick tour of the vessel. Despite occasionally heavy rains, we have been delighted to receive more than 4,000 visitors to the ship since our arrival in Galle on March 19.

One visit today was particularly special–Lieutenant Amila Abeywickrama of the Sri Lankan Navy presented Captain Saleh with a beautiful drawing he had made of the Jewel of Muscat sailing into Galle harbour. The superb drawing is a wonderful memento of the warm and enthusiastic reception the people of Sri Lanka have given to the ship and its crew. In response to this gift, Captain Saleh presented Lt. Abeywickrama with a signed teak block from the Jewel of Muscat.

The crew will continue with general maintenance of the ship for the next few days as they anxiously await the arrival of the new masts from Colombo. At that point, the pace of work will increase dramatically as everyone does their part to prepare the ship for the long voyage to Penang, Malaysia.