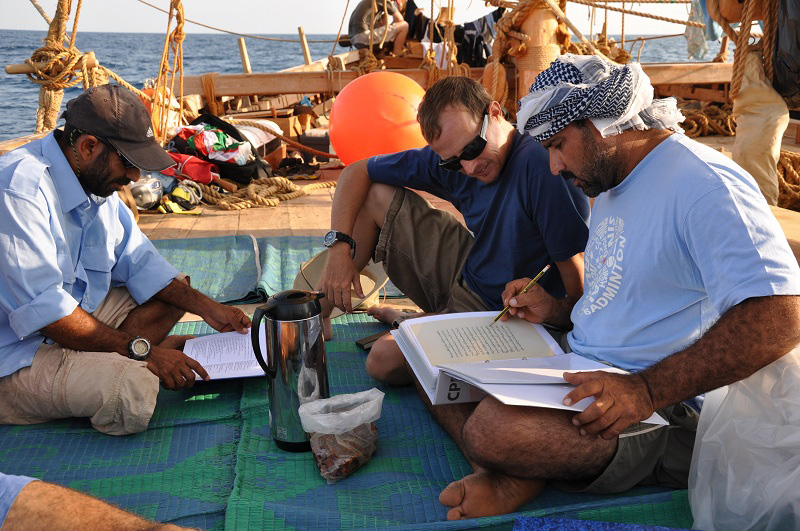 A magnificent dawn today as we watched the full moon set at the same moment that the sun rose. What a splendid sight to see them on opposite horizons!

We continue to enjoy the effects of the light Northeast monsoon winds as they propel us closer to the Laccadive Islands–formerly an important stopping place on the ancient trade routes.

Today was busy for the crew–as always–but otherwise uneventful. Sajid successfully repaired the reinforcement beam that we added to the upper portion of the mizzen mast several days ago.

Late in the afternoon, Captain Saleh, Eric Staples and Adam Al Baluchi studied a 15th century navigational text written by Ahmed bin Majid, the great Omani navigator and poet. Although he is known in the West as the man who helped Vasco De Gama reach India, there is little historical evidence to support this belief.

Instead, Ahmed bin Majid should be regarded as among the most knowledgeable and instructive navigators in history. In 1490 he wrote his famous Book of Useful Information on the Principles and Rules of Navigation–a poetic encyclopedia of the monsoon system, star charts, Indian Ocean coastlines, reefs, currents and many other topics essential to navigators. His analysis of the location and movement of the stars was a particularly valuable aspect of the book.

Unlike European sailors of that time who determined their latitude by measuring the altitude of the sun, Ahmed bin Majid and other Arab navigators used the stars–particularly, but not exclusively, the Pole Star–for this purpose. This was a more sophisticated and precise system than that of the Europeans. As bin Majid himself stated:

[Europeans] do not have a knowledge of stellar altitudes; they have no science and no books, only the compass and dead reckoning… We can easily sail in their ships and upon their sea, so they have great respect for us and look up to us. They admit we have a better knowledge of the sea and navigation and the wisdom of the stars.”

One suspects that Ahmed bin Majid would be pleased to know that, 520 years after he wrote his most important book, another Omani sea captain is applying bin Majid’s navigational knowledge and techniques to sail the Jewel of Muscat across the Indian Ocean.