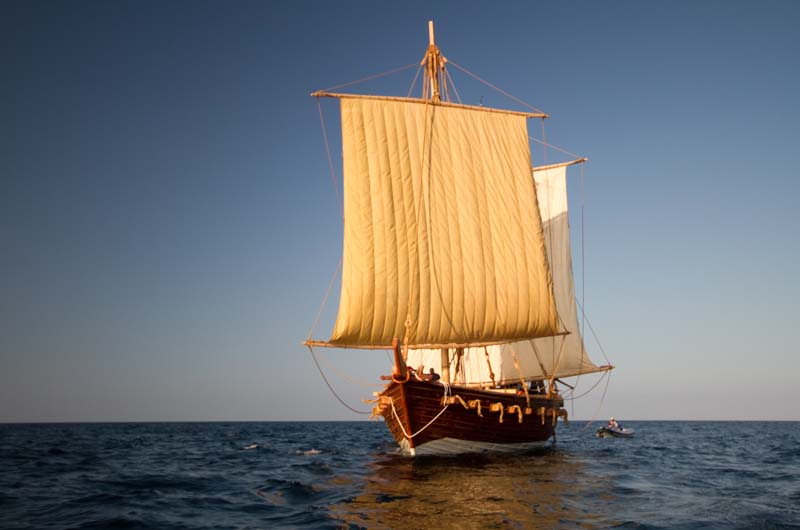 Numerous dignitaries from the Indian and Omani governments attended the departure ceremonies this morning under the bright Cochin sun, kindly greeting Captain Saleh Al Jabri and each member of the crew before offering their best wishes for a successful trip. With music provided by an Indian Navy Band, and boisterous cheers from the crowd, the crew cast off the mooring lines, waved their appreciation, and headed out to sea.

And so we set off again on our great adventure. The skies are clear, the winds excellent, and the Jewel is heading South-South-West at a steady five knots. Earlier this evening, the crew gave a great cheer as we briefly reached 7.2 knots–a record speed for the Jewel of Muscat. Of course we are all mindful of the fact that this day wouldn’t have been possible without the extraordinary efforts made by many crew members, Indian workers, and project support staff over the past three weeks that the ship has been in Cochin.

Despite the heat, humidity, and occasional thunderstorms, the Jewel of Muscat was a veritable beehive of activity as the entire hull was cleaned and re-sealed, new rigging added, repairs to the mizzen mast completed, and new supplies of food and water stowed. In addition, the support staff efficiently handled the complicated logistics of hotel arrangements, customs, immigration, purchasing of supplies, obtaining airline tickets, and contracting workers. It was an enormous undertaking, and Captain Saleh and the crew wish to extend their sincere gratitude to all those who worked so hard to enable the Jewel of Muscat to begin this next voyage safely and on schedule.