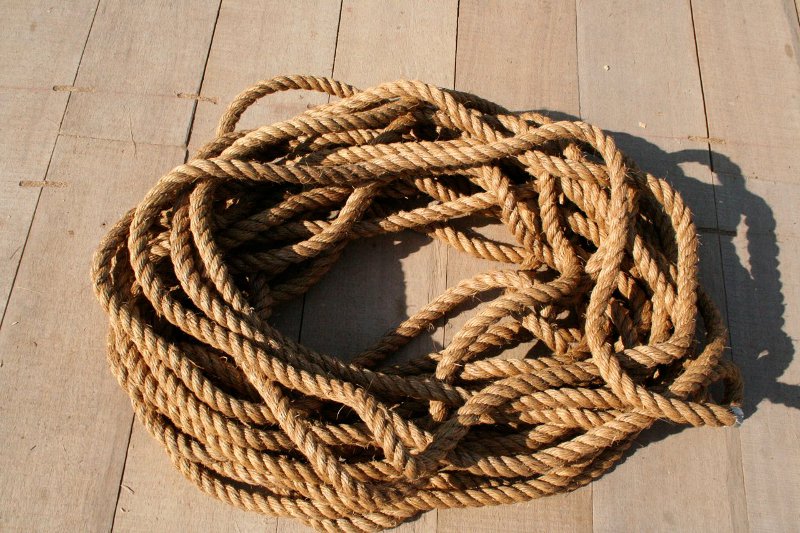 Everything is kept tidy

As the crew gathered for its first breakfast of this leg, it was clear that it will take a while to get used to life aboard the Jewel of Muscat again

The fatigue caused by the departure preparations, a lack of sleep, and a few mild cases of sea-sickness, was evident on the faces of the crew as we shared the meal. Nevertheless, our spirits are high and we are all delighted to be back at sea. Aboard, we have two new crew members, Tuanie Ismail from Sri Lanka and Geoffrey Dobbs from Great Britain, who currently lives in Galle, Sri Lanka.

With steady 10-12 knot winds and clear skies it was a perfect day for sailing and we made excellent progress southward–covering 92 nautical miles in 24 hours. The term “knot” is a measure of speed over water an equivalent to 1.8 kilometers per hour. The term came into use approximately 300 years ago in Europe. Then as now, a ship’s speed was an important variable for accurate navigation. At that time, however, calculating speed was problematic, so mariners devised an ingenious system whereby one end of a rope attached to a small log and knotted at regular intervals was thrown overboard. A sailor counted the number of knots which passed through his hand as the rope played out in a given period of time–as measured by a small sand-glass–and the resultant number of “knots” was the ship’s speed. Of course the knotted ropes are long gone, but although modern technology provides today’s sailors with the means to measure a ship’s speed with great precision, the term “knots” remains. (Traditonal Arab sailors, used a unit of measure known as “zams.” One “zam” was approximately three hours of time, but the old navigational texts indicate that it was also used as a measure of distance.)

The ship is handling notably well in these conditions and seems to move faster relative to the wind than she did during the first leg of the voyage. While she was in drydock in Cochin, approximately three tons of gravel ballast were removed in the hope of improving speed and performance and this modification seems to have been successful. (We still carry approximately 23 tons of lead and gravel ballast for stability.)

After sunset we began noticing flashes of lightning far off on the southern horizon. We kept a watchful eye on the skies as we sailed toward the storm, but it died away before we reached it. While it lasted, however, the lightning and thunder provided the night watches with a spectacular show of nature’s power–made all the more pleasant because it was far away. Standing at the bow watching the following lines from Robert Hilton’s delightful poem “To Readers of Sea Poetry.”
“The power unharnessed in one living storm
Is a marvel that catches the breath.
It always excites me as long as I’m warm;
In not too much danger of death.“