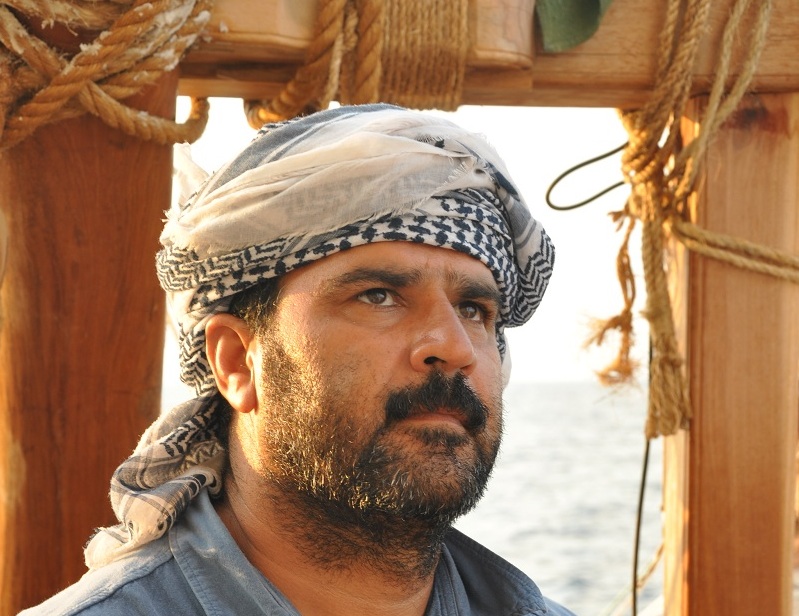 Adam Al Baluchi at the helm

A life at sea

We come from several different countries, but we are truly one team with one heart and we help each other do our best

I come from the village of Batha Hilal, 100 kilometers northwest of Seeb. My father was a merchant who sailed in big Omani boums all over the Indian Ocean for his business. As a boy, I remember him telling us stories of Bahrain, Baluchistan, India, and Zanzibar. The boums he sailed in were beautiful ships and I still remember how exciting it was to see them sailing on the horizon. Many of them were built in Sur, and some of my family still lives there.

My father’s life as a merchant was interesting, but also difficult. Sailing was often uncomfortable because the ships were crowded with goods and people, and if storms came sailing could be dangerous. Thanks to God, his ships never got into serious trouble at sea.

Of course I grew up next to the sea and I always loved swimming, fishing, and sailing after school and in the summers. When I grew up I decided to join the Royal Navy of Oman because I thought it would be an interesting life, and it has been. I joined the crew of Oman’s great sailing ship, the Shabab Oman, in 1994 and got to travel to many countries including Greece, Portugal, and France.

I suppose my most meaningful memory of those travels was the time I visited Normandy for the anniversary ceremony of the battle that was fought there during World War II. Walking along that beach I realized this was not like any beach I had ever experienced. Instead of people playing loud games and having barbeques, the people at Normandy–thousands of them–walked slowly along the wide sandy space and spoke to each other quietly. I also saw the enormous cemetery next to the beach for all the men who died there in 1944. The grave markers were white and neatly organized, and they seemed to go on forever. Normandy beach reminded me that war is a terrible thing and I hope to God that my children will never have to experience such a thing.

I decided to join the crew of the Jewel of Muscat when I heard that Saleh Al Jabri was going to be its captain. I had worked with him on the Shabab Oman and have a great deal of respect for his knowledge and leadership skills. So when he called me to invite me to sail with him aboard this amazing ship, I said yes immediately. I also admire Dr. Tom Vosmer very much for directing the construction of this ship, and I have complete confidence in it. Dr. Vosmer is a great man because, even though he is Australian, he has given so much time and hard work to helping Oman rediscover its sailing traditions. He helped build the Sohar and sail it all the way to China in 1980, and now he has built the Jewel of Muscat so that we can sail it to Singapore.

This voyage is important because it will help build friendly and cooperative relations with Singapore, and it reminds Omanis and the world of the great role that Oman has played in maritime history. So I am very proud to be a member of the crew. We come from several different countries, but we are truly one team with one heart and we help each other do our best. In my life I have received many good things from my country, so I am happy to work hard to make this project a success for Oman. My only regret is that we can’t sail the Jewel of Muscat even farther than Singapore.