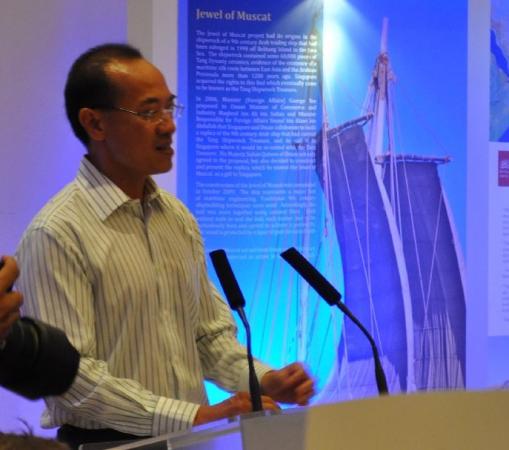 Tonight, we celebrate. It is a big celebration, because the Jewel of Muscat’s epic journey from Muscat to Singapore, based on navigational methods of over a thousand years ago, tells a remarkable story.

It is a big story about which much more research would have to be done for years to come. You can pick it from different points. Many of you would have seen samples of the Tang cargo. It was by a fluke, by an accident that the cargo came into Singapore’s possession. It was found by fishermen almost twenty years ago. The salvage company was unable to sell the entire cargo and they were about to break it up. One day, a representative wrote me a strange letter telling me about the cargo and offering it to Singapore. I receive all kinds of letters in the course of my work and I was about to put it in the out tray when I thought I better read it again. Then I thought, maybe I should see him. He came to my office and showed me the pictures, and he persuaded me that Singapore was the best place to house the cargo and that it should not be broken up, because if you break it up, it loses its meaning. But the cost of it was beyond the resources that we had. We could not justify to the taxpayers of Singapore acquiring antiques, so I thought, let me think about it. I asked Sentosa, I asked the [Singapore] Tourism Board. The Tourism Board said, “Yes, we can justify it based on tourism,” but they could only stump up a part of the money.

But you know, God has a way of providing and one day, the Khoo Foundation offered to stump up half the money. And so, it was within grasp. But the price was too high and we had to negotiate it down. In the end, the company went into trouble and they wanted a loan from us. We gave them the loan, secured against key elements of the artefacts, and in the end had a reasonable bargain. So it came into our possession. The pieces were in New Zealand – 60,000 pieces. We had to bring them over, didn’t really know what to do, didn’t really understand what it meant, we only knew it was very old and that there were some interesting gold and silver pieces.

Among the pieces were a few “blue-and-whites”. Now we all know that the “blue-and-whites” marked the Ming Dynasty which came hundreds of years later. The blue being the blue of cobalt from Iran, but the Chinese had experimented with it for a long time. The Tang Dynasty, which is famous for its san cai – brown, green, yellow and … red – were only beginning to experiment. In that cargo, I think there were three or five pieces in perfect condition, precursors – centuries later – of Ming blue and whites.

So you can take the story from Chinese ceramics, you can take it from the perspective of geo-politics. It was the age of Tang – Tang was the greatest empire in Chinese history. A number of its Prime Ministers were not Chinese but Central Asians. When its army crossed into Central Asia, incidentally under a Korean general, it met the Abbasids in Central Asia and was defeated by the Abbasids. It was also the age of Nalanda in India, when the Buddhist University attracted students from all over Asia, and at its peak had 10,000 students, including students from Southeast Asia, China, Japan, Korea, Mongolia, Kazakhstan … many other places. It was the age of Srivijaya in Southeast Asia, and the kingdoms along the maritime Silk Route competed for the China trade. One of the most important kingdoms in South Asia, the Cholas, destroyed Srivijaya in order to capture their trade. So you can take that story from an earlier age of globalization, when like today, far flung places were connected.

But it is also a story of the human spirit, about the Omani spirit. We all know that in its heydays, Oman’s influence stretched all along the Swahili coast down to Zanzibar, to Baluchistan, to Gwadar. How did such a small population fan out over such a wide area, when navigational technology, when ship technology was so primitive? I was reflecting: when a dhow was sent out, what percentage would ever come back? And the families who sent out their menfolk on these journeys, they must know that many will not come back and worse, we may never know what happened to them. Maybe they will come back one day. People grow old but still the hope, a prayer that maybe they had survived, settled and will re-establish contact – or they may never do so. To preserve such a spirit of adventure required an entire social system of families, extended families, tribes holding together. A way by which, when people do not come back, their children and families are looked after. Over the centuries, these journeys shaped that value system, the culture of the Omani people, giving them a strength and tenacity that we see even today.

I have been to Muscat just once. But you know Sayyid Badr, it was a very happy visit, we felt so welcomed. You are modest people not given to ostentation, a certain sense of proportion. I visited your Grand Mosque. Yes, it was grand but it was understated, and beautiful and calm. I walked through your souk. It was spotless and after a half an hour investigation, at the end of it, I found one sweet paper at the end of the alley and I said “Ah, I found a piece of litter.” Unlike Singapore, there were no trash cans so the sense of cleanliness, of social responsibility is internalised. How did it come about? Because of long years of having to look after one another, not knowing whether people would come back, not knowing what the future would bring. We are so fortunate that because of a decision taken years ago to acquire some pieces of pottery, we have re-established an ancient link between Singapore and Oman, between Southeast Asia and the Middle East.

Sayyid Badr was in the car with me as I was travelling to my hotel, near the roundabout, he said, “That’s the Sinbad ship which we constructed to establish how the ancient mariners travelled from Muscat to China. They proved it could be done.” I told him of the Tang cargo, and my suspicion that it came from the Omani coast. Half in jest, I said, “If we had the money, could you build it for us?” I wasn’t sure because we didn’t have the money. We hardly had enough money for the cargo, let alone the museum to house it or the research facility to understand what we have acquired. He said, “Yes, it could be done” and we discussed it and a few months later, came the wonderful news that Sultan Qaboos had decided to rebuild it and donate it to Singapore. It’s not as if you are rebuilding on a plan that you are aware of. You are building something, so long ago, of wood, of methods that had long been lost. So much work had to be done, so many studies had to be made, so many experiments had first to fail before this could be accomplished. And then, finally, the journey.

When they left on February 16, I suddenly felt a chill down my spine because what if something had happened, and people perished. And that night I told my wife, I said, “Let us pray”, because… I know Captain Saleh you had every faith, but I do not have the same faith as you and I was quite worried. Then, on the Internet I could see the little boat chugging along to Cochin and then to Galle, [then to] Penang. Then we saw you finally in Selat Pauh, that morning when we had wind and rain. I think all of us felt so emotional.

You have a remarkable King. When he made that decision, it was not just a decision to make a State gift. It was really a decision to tell his people about their past, so that they are better prepared for the future. And that future is about a new Asia, a new age of globalisation, a new silk road much larger than the one before, which will connect us altogether again. And that, which had prepared you all these years for the journeys, will prepare you very well for the future and we count ourselves so blessed, so lucky, so fortunate to have you as our friend.

So to the crew, Captain Saleh and all your incredible mariners: welcome, thank you and Godspeed.