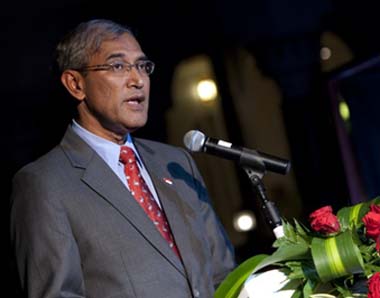 Text of speech by H.E. Zainul Abidin Rasheed, Singapore’s Senior Minister of State for Foreign Affairs, at the Jewel of Muscat Gala Evening

On behalf of Senior Minister Goh Chok Tong and the Singapore delegation, let me begin by expressing our heartfelt appreciation to His Majesty Sultan Qaboos bin Said Al Said and the Omani Government for the warm and generous hospitality that has been extended to us for this visit. We are honoured to be part of the celebrations this evening to launch an iconic project symbolising the warm and close relations between the Sultanate of Oman and Singapore. Indeed the sailing of the dhow, aptly named the Jewel of Muscat, is more than a powerful symbol of the relations between our two countries. It reflects a determination to recreate the historical bilateral and regional links between us.

The Jewel of Muscat, which we viewed earlier today during the naming ceremony, is a work of art. It is a marvel of engineering and craftsmanship, and a demonstration of the ancient genius and the resourcefulness of Oman’s craftsmen. It is also a fitting tribute to the intrepid Omani sailors who, with little more than the stars to guide them, braved the winds and waves to venture into uncharted seas towards distant lands.

Like all great works of art, the beauty of the Jewel of Muscat lies not only in the elegance of its lines and form, but also in the rich threads of meaning and significance in which it is bound. These are threads that lead us towards the rediscovery of our common history, and inspire us towards the renewal of ties between our two regions.

The ancient dhow upon which the Jewel of Muscat was based was part of a thriving trading system that, as early as the 9th century, linked Asia and the Middle East. Arab traders brought Islam from the Muslim heartlands of the Arabian Peninsula to the island archipelagos of Southeast Asia. Some sank their roots in Southeast Asia. One of them was Syed Omar bin Ali Al-Junied, a successful Arab merchant and philanthropist. One of my favourite neighbourhoods in Singapore, Aljunied, is named after him. So is my Constituency, Aljunied GRC. My Minister, Mr George Yeo, Singapore’s Minister for Foreign Affairs, is the anchor Minister of the Aljunied Group Representative Constituency. In fact, this dhow project was conceived after a discussion between Mr George Yeo and his colleagues in Oman about the historical trade links between our two regions and Omani dhows plying the maritime route centuries ago.

The threads of history link another Singapore neighbourhood, called Kampong Glam, to the Middle East. Then located by the sea, Kampong Glam was named after the gelam tree, whose bark was used by sailors to seal gaps in their boats. As it was the seat of the Malay Sultanate in Singapore and the centre of the Muslim community, Kampong Glam naturally attracted Arab traders who had come to Singapore. The influence of these Arab traders remains visible today in the names of some of the streets in Kampong Glam, one of which is called Muscat Street. Singapore and Oman are working together to give Muscat Street (between Arab Street and Kandahar Street) a distinctly Omani flavour, another symbol of our close ties.

Asia and the Middle East are old friends. We have been linked not only by the famous Silk Road and Spice Route, but also by the Maritime Silk Route. The genesis of this project was the discovery of a shipwrecked Arab dhow a few years ago. Amazingly the cargo carried by this dhow was intact. This cargo comprised consignments of Chinese ceramics, inscribed not only with Buddhist and Chinese motifs, but also with elegant Arabic calligraphy, pointing to the existence of a maritime trade link.

There is an Arab and Asian proverb that a journey of a thousand miles begins with the first step. The Jewel of Muscat project is such a step, one that places Singapore and Oman at the beginning of a long journey of re-discovery. As small trading nations and gateways to our respective regions, Singapore and Oman are natural partners in this journey.

Before I close, let me take this opportunity, on behalf of Senior Minister Goh Chok Tong and the people of Singapore, to express our sincere thanks to His Majesty Sultan Qaboos, for his generous gift of the Jewel of Muscat to Singapore. It is a treasure that symbolizes the friendship between Singapore and Oman, as well as the ancient links between our two regions. I would also like to thank all those who have been involved in the construction of this magnificent dhow for making this project a reality. Finally, we offer our best wishes to the crew as they embark on this historic journey, and look forward to welcoming them in Singapore. We also hope that the top Omani leaders would be able to travel to Singapore to welcome the dhow as it sails into Singapore.