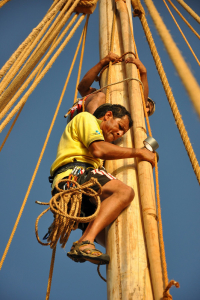 Tricky work on the mast

The major task on board today was to fix a large support strut to the mizzen mast. In high winds we noticed that the mast whipped a bit too much in the upper section, so the strut is intended to provide additional support. Attaching it to the mast, however, was a difficult and rather risky task.

Sajid Valappil, one of the carpenters on board, and bosun Said Al Tarshi were suspended by ropes 15 meters above the deck for several hours as they struggled to complete the work. They managed to finish the most difficult part of tying the strut–remember, no nails or bolts on the Jewel–but they will have to go up again tomorrow morning to make some final adjustments.

The crew is now divided into two watches–starboard and port. Last night the starboard watch for example was on duty from 2000 to midnight, and from 0400 to 0800. So we slept only from midnight to 0400. When it comes time for a change in the watches, one person comes below to wake up the members of the relief watch. We sleep in our clothes, but we still have to put on shoes, safety harnesses, life-jackets and safety beacon–which we wear at night. When each man is ready, he climbs the ladder to the deck, murmurs his greetings to the other crew members and sets to his tasks.

Depending on the weather, breakfast might be available anytime from 0800 to noon. Today we ate boiled eggs and canned fruit. Lunch is usually late in the afternoon–again depending on the conditions. Today we had Chinese noodles. Dinner is usually rice with some sort of sauce. Yesterday the rice contained the last of our chickens. Meal times are some of the most enjoyable on board. The crew joke and tease each other a great deal and some members are great story tellers. No doubt mariners have passed their free time in this manner for thousands of years.