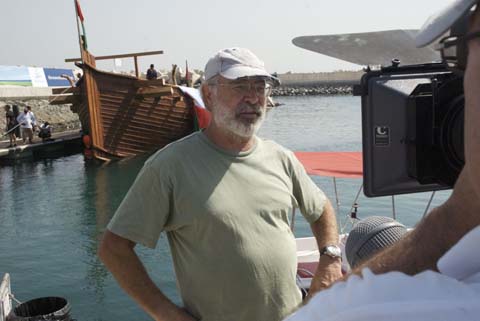 The launch was such a long process I am absolutely confused how long it took. Someone told me 46 hours – it could be.

Exhausted isn’t the word I’m so tired I feel sick with fatigue. But at the same time I feel elated and ecstatic because the Jewel of Muscat is launched.

When she finally went in she caught us a bit by surprise – we still had an hour or so to go to high tide. And then when she got into the water she moved nicely. She’s a good mover our girl. There’s no more leaking than we expected; the timber has been drying out in the sun for nearly a year as we built her. So now the planks need water, they’ll drink it up a bit and swell and then they’ll close up.

We had a really super team, the engineers, the people from Oman Sail and especially our Omani trainees. Over that last 46 hours or whatever it was they worked constantly, they hardly slept at all. They really pitched in. When we said the job has to be done, that there’s no going home tonight, they responded beautifully. You can see the joy in their faces today; they’re very proud and they should be.

And we had a lot of input from engineers, a lot of decision-making, a lot of changing decisions, but things evolved our thinking on how to do things changed.

Now it’s on to fitting out, putting in the masts, deciding what accommodation she’ll have, ballasting, rigging and completing the sails.

But first we’re going to take time to reflect, have some time off and go to sleep!”