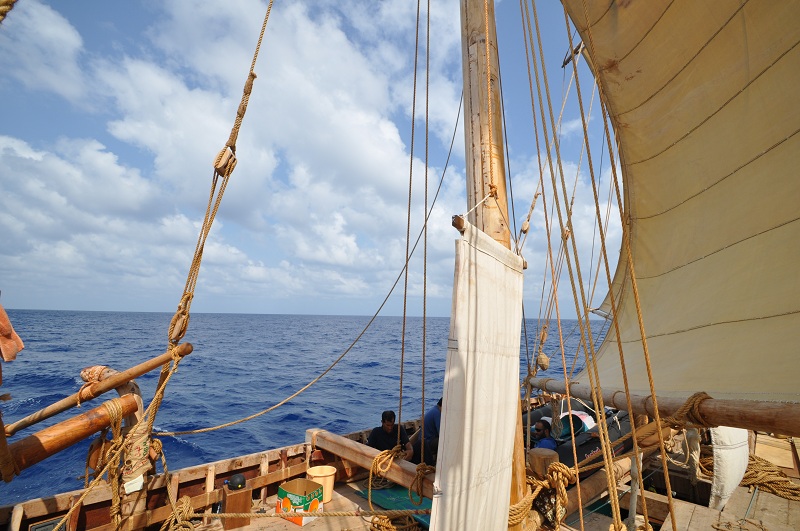 Skies are beginning to look tropical

The Jewel approaches the Lakshadweep Islands

Some good winds today, and beautiful tropical clouds. We have begun to see more signs of sea life.

This morning we spotted a large flock of birds in the distance that appeared to be feeding on fish. Shortly after we saw large fish jumping, but at too great a distance to identify what type they were. This afternoon an exceptionally large green sea turtle appeared very briefly off our port side. Clearly we are nearing the continental shelf where we can expect to encounter more sea life.

Reflecting back on the question about fishing asked by Daniel Jackson in Muscat, when Tim Severin and Tom Vosmer sailed this route in 1980 aboard the Sohar they were unable to catch fish for most of the voyage until they came close to the Lakshadweep Islands (Laccadives). We are closing quickly on those islands now, so Daniel our luck might change soon!

If the wind maintains its present strength and direction, we should see the Lakshadweep Islands sometime tomorrow evening. These fascinating and rarely visited islands are located off the coast of Kerala and are part of the same undersea volcanic system that forms the Maldive Islands which lie slightly to the south. The inhabitants of the islands are Sunni Muslims and speak a variant of Malayalam, the language of Kerala.

For at least two thousand years, sailors from the Indian Ocean and beyond have visited the Lakshadweep Islands to seek shelter from bad weather, obtain fresh supplies of food and water, and for trade. Among their most important resources is the coconut, from which they obtain the fibre used to make high-quality rope. Indeed, a Persian document dating from 1026 CE refers to the Lakshadweep Islands as Diva-Kambar–meaning Coir Islands. The documents states, “Coir is the fibre that is produced from the coconut husk and used for making ropes for ships.” Somewhat later, a 12th century Arab geographer wrote, “To these Islands come the ships of Oman to gather coconuts and cut wood to build their vessels.” The inhabitants of the islands have maintained their skills of rope-making and constructing sewn boats until modern times.

The Jewel of Muscat will not stop at the Lakshadweep Islands–they are closely protected and special permission from the Indian government is required to visit them. Nevertheless, we look forward to seeing their palm-fringed beaches from a distance as we pass by on our way to Cochin.