Building wooden ships – then and now

The Jewel of Muscat, built on the beach at Qantab, Oman, is a reconstruction of a ship that was wrecked near the island of Belitung off the coast of Indonesia. 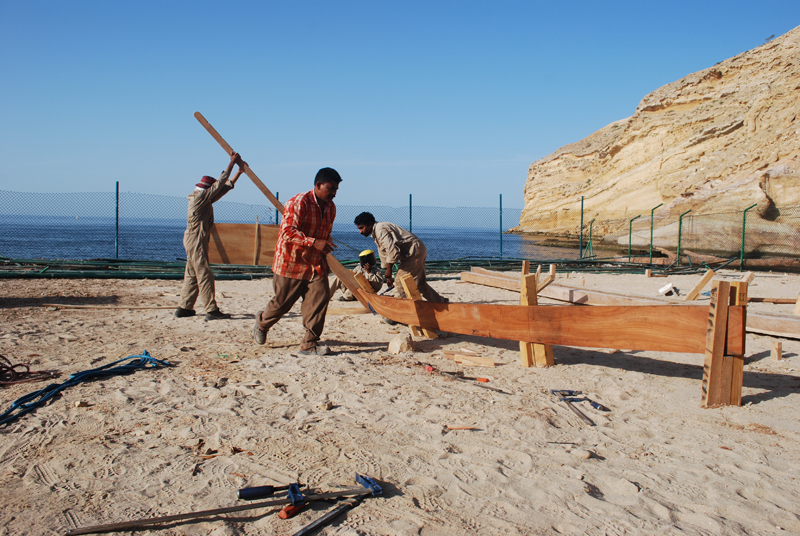 The Jewel of Muscat is constructed using traditional materials and age-old techniques developed many centuries ago.

How is this ship different from other wooden boats around the world?

The biggest difference is that Jewel of Muscat is a sewn boat. The planks are stitched together using coir rope made from coconut fibre.

This video explains how coir rope is made and how a traditional Omani sailing vessel, the Bateel, is constructed by sewing the planks together with coir rope.

Other wooden ships have been held together with wooden nails (treenails or trunnels) which are cylindrical lengths of wood hammered into the hull to join the planks to the frames. Iron fastenings such as bolts, rivets, screws and nails are also used as well as various types of glue. Wooden hulls can now be coated with fibreglass to make them stronger and more long lasting.

Over the centuries the challenge of bending wood to make the shape of a ship has been tackled in various ways. Placing a plank of wood over a fire and weighing down the ends helps to soften and bend the timber. The Jewel of Muscat team uses steam to soften the timber. They can then bend and twist it into shape with ropes and levers.

This video shows the use of a steam box to heat and soften timbers so they can be bent and twisted into shape. The steaming of the Afzelia Africana, the timber chosen for the hull of the Jewel of Muscat, is also documented. It shows the importance of experimentation when using untried materials.

In more recent times wooden boats have been built with sheets of timber (plywood) attached to frames using glue and metal fastenings or strips of wood moulded and glued together to create the shape of the hull.

Sail material has vastly improved over the centuries. Today sails are made from synthetic materials such as kevlar, mylar and carbon fibre. These sails are made using computers and are remarkably light and strong. Kevlar is also used in the construction of bullet-proof vests.

A crucial part of any long sea voyage in a wooden ship is the protection of the underwater part of the ship from attack by shipworms, small wood-eating sea creatures.

The underwater part of the Jewel of Muscat is protected by a layer of goat fat mixed with lime. The mixture is smeared onto the hull in thick layers. This needs to be done on a regular basis to protect the ship.

This video shows how chunam is made (from lime and goats fat). Chunam is the traditional anti-fouling agent used to protect the hull. The lime is made from burnt seashells. When more lime is added to the mixture a water-proof putty can be made which is used to fill holes and seams. The last part of the video shows how the anti-fouling mixture is tested in sea water.

Tiny sea creatures called shipworms can sink the biggest wooden ships. A common shipworm is the teredo worm. They begin life as creatures almost invisible to the human eye. They latch onto the hull of a wooden ship and can grow up to one metre in length as they eat through the timber hull.