The people of Oman have been traders since ancient times. The first traders travelled overland in groups called caravans. They used camels and donkeys to carry their goods. The traders followed parts of the trails that linked China, India, Persia and Arabia with the Mediterranean countries. These routes have become known as the Silk Road.

Many goods were traded along the Silk Road between different regions. From Arabia, traders carried dates, flax, cotton, vegetable dyes such as madder (red dye) and indigo (blue dye) and the aromatic resins frankincense and myrrh.

Goods brought back to Arabia from the East included spices such as pepper and star anise, silk, Chinese medicines and porcelains (pottery). 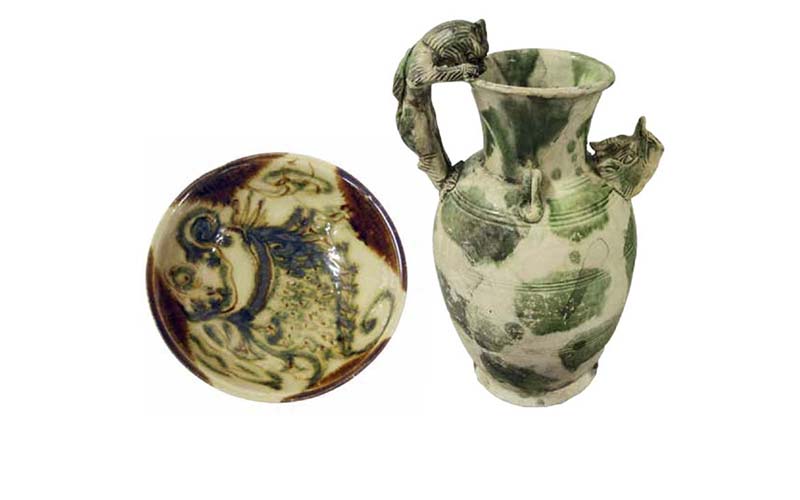 Traders expected to make great profits from selling their goods but the land routes were dangerous with deserts and mountain ranges to cross. A lookout had to be kept for bandits. Traders were often forced to pay for a safe passage as they entered new territories.

By the middle of the 9th century there was a trade route by sea between Muscat and China. Larger quantities of goods could be carried by ship but there were still many dangers. Desert sandstorms and bandits were replaced by storms at sea and pirates. And finding your way on the open ocean was far more difficult than following a trail on land.

While the main evidence of this trade comes from old documents, further proof came dramatically in 1998 with the discovery of an Arab trading vessel that was shipwrecked in the mid 9th century.

To understand more about these early trading voyages, a new ship, the Jewel of Muscat, was built. The ship is a reconstruction of the vessel discovered in 1998 and it sailed to Singapore following part of the ancient trade route to China.

In this video, the Construction Director Tom Vosmer explains the importance of the shipwreck to the project. Information gained from the shipwreck about the hull, construction methods and materials will be used to reconstruct the 9th-century trading vessel, the Jewel of Muscat. The ship sailed to Singapore to be part of a museum.

How do you sail a 9th-century trading ship?

During the voyage from Oman to Singapore the crew will live as the sailors did in the 9th century. However, the diet will be more varied and modern navigational equipment will be used to monitor the ship’s performance.

Research has revealed the following information about life on board an Arab trading ship during that period.

Click on the PDF below for the Classroom Activity sheet.