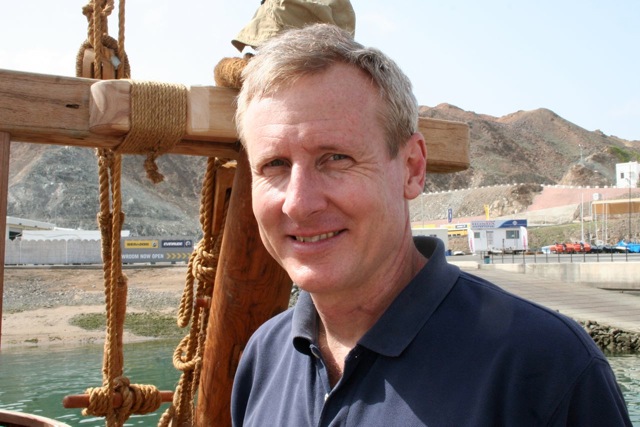 Greetings from all of us aboard the Jewel of Muscat on a bright, still morning

After enjoying the spectacular send-off in Mutrah harbour, we bid farewell to our escort boats and raised our sails in light and shifting winds.

Sailing a 9th century ship is hard manual work–no winches or capstans here. We set and re-set the sails but the soft air kept us within sight of shore through the afternoon. It was as if the Jewel was reluctant to leave her place of birth, like some fledgling bird unwilling to leave its nest. But by evening the wind strengthened and, perhaps emboldened by some ancient instinct, she turned her bow bravely to the far horizon.

The winds remained steady well into the night and the Jewel carved a brilliant wake of bio-luminescence across the sea.

We are in high spirits this morning despite some fatigue. Space below decks is cramped with all manner of provisions and gear, but the lack of room didn’t prevent everyone from enjoying a short but deep sleep when their watch was done.

Now the sun is up, popular Omani music is coming in on the radio, and the goats are nervously exploring the deck of their new home. Everyone became quite excited a few minutes ago by the sighting of our first whale–until it turned into a large piece of driftwood. So with strong coffee in hand, we look forward to day two of this great adventure.